GT Spirit delivers a model car of luxury convertibles in 1:18 to retailers; another goes exclusively to modelissimo and ck-model cars. 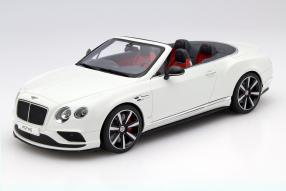 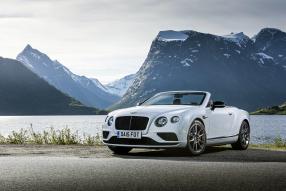 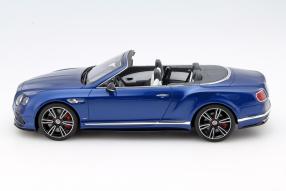 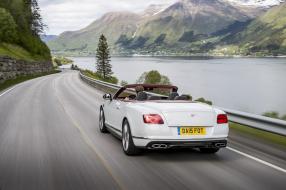 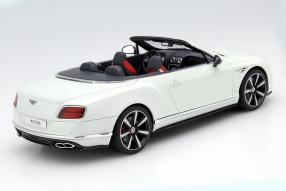 Hello, and good morning, love car fans. It was, as you probably know, has always been more expensive to have a special taste. This is especially true for cars like the Bentley Continental GT V8 S Convertible, which is attributable to the automotive high-end class. It cost Around 199.000,00 euros to have the basic version of the luxury automobile delivered to the door. There are the matching model cars from GT Spirit, affordable. And although they require less cash, the high-end area belong to their world. The available general retailers Model car in Morrocan Blue is availible under the article number GT076 and limited to 1,000 copies; in Glacier White are on the two dealer modelissimo and ck-modelcars the second Bentley.

the model car in detail

The limited to only 504 pieces Model in White is listed under the number ZM046, but costs despite lower number of pieces only 89,95 € instead as the Blue Edition 99.95 euros. Common to both models is the high-class finish and the absolutely perfect image of their appearance that exactly coincides with the look of the model. Given the details of the model car it can happen the collectors know that it shines with the spring sun around the weather, so much joy prepares watching the miniatures. The drawing by prototypically the state of the Bentley Continental GT V8 S model year 2016, which was presented at the Geneva Motor Show, 2015. GT Spirit has managed with great care and attention to detail, to transfer its innovations in the model.

Redesigned was the front end, which has a new bumper with a modified design and a slightly different grille. The rear is also redesigned, one finds here a new rear bumper and a new trunk lid. The chrome trim now includes the entire tail, similar to the Bentley Mulsanne from 2009. Particularly attractive details are the side air vents in the form of the "Flying B" that immediately catch the eye even when model. Inside, the steering wheel and the shift paddles were changed subtly. A view of the interior of throwing causes the collector feels downright invited to sit on the Rautensteppungen the sumptuous upholstery, the GT-Spirit has wonderfully remodeled.

Both seating is in two different colors; The round air vents and the instrumentation shown in a uniquely beautiful way. The appearance and the interior could have done no better than GT-Spirit has made it. For the wheels, the models involve different approaches, but both are technically excellent and in optics borrowed the Wheels program of Bentley. The headlights are a hit in the construction and look; the build quality of BBQ grills and brand logo and the chrome on the respective parts can not be desired. Only one it is again, that we lack: A look at the engine.

Because the built resine plastic model cars deny us the look under the hood; just as in miniatures from this main material common. Would that be different, we would be able to discover a magnificent twin-turbo V8 - at least as a model. Its model makes 389 kW / 529 hp at 680 Newton meters (Nm) of maximum torque; connected via eight-speed automatic. 308 kilometers per hour are Bentley as speed; 4.7 seconds, the Cabriolet accelerates from 0 to 100. Now, as already with the Coupé thus provides GT-Spirit with the open version a superb item from model from that earned in the current finish a perfect score. Thus, it can also be in the collector showcases the spring sun shine more brightly than ever, right?