The luxury model car label displays with the Ferrari 1:18 another version of the miniature elaborately made. 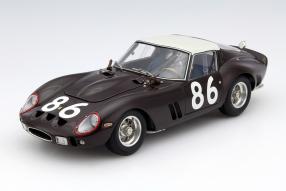 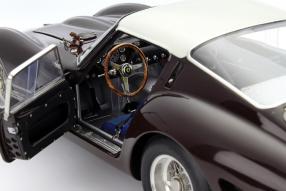 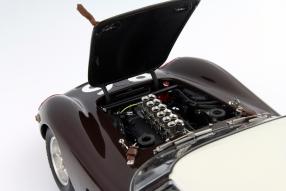 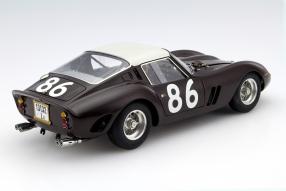 More than once we have written about the 250 GTO from the makers CMC. So far, he has appeared in civil expenditure, which brought us, because of the overwhelming good execution of the details, a lot of joy. An engine that is plugged into a model of CMC, is a delight, that the collector can not take his eyes from. This is also in the model car that is here availible under the item number M-156 for €499.95  and a variant corresponds to the Targa Florio. A high price, yes, but also an exceptionally high value, which the collector gets the model car made of die cast zinc. Doors, hoods and even the caps are open. Our favorite feature: The leather straps with buckles that hold the hood front closure.

A look at the details

The fact that the lines of the body and the appearance of their looks the appearance of 1962 presented idol absolutely perfect match, we are used to from miniatures from the house CMC: Grade up to the last ventilation groove the car model look and proportions of the classic is distinguished by perfect; the appearance is consistent without compromising the original. The Exterior thrilled with openable tank lid, with incredibly beautiful made-spoke wheels, with the broken executed air outlets in the front fenders, the made of transparent plastic covers of the air intakes on the hood and on the Radhausentlüftungen on rear fenders and a filigree replica inner workings of the tail pipe pieces.

Victories in the 12 Hours of Sebring, the Targa Florio, the 1000 km of Spa-Francorchamps and Le Mans - where the GTO 1962 and 1963 also came second and won the GT standings - have let the car be a legend. The model that we present here, which reduces the version with which the driver Giorgio Scarlatti and Pietro Ferraro, the Targa Florio completed in 1962 in Sicily. The long-distance races on public mountain roads in Sicily was brought there from traders and nobles Count Vincenzo Florio to life, whose family belonged to the streets of this racetrack. Scarlatti and Ferraro went to the Ferrari 250 GTO in the GT class 3.0 under the # 86 into the race.

Both the driver and the car stopped by and ended the contest after 10 laps on the 4th place of the final standings. We would like to discuss here again the engine of the model: Alone the view of the Ansaugtrompeten replicating the V12 fascinates the observer. Cylinder heads, cooler lines, spark plug and screw the drive set are followed exactly understand 1:18 that we can not believe that there will be 1,500 copies of this testimony traditional craftsmanship. A miniature with the finish of a single piece, amazing! The engine took originally 217 kW / 297 hp from approximately 3.0 liters. We think: The Ferrari 250 GTO of CMC is the king of all car models.