05.12.2021Spark dedicates a high-quality resin model to the second victory of the team Scuderia AlphaTauri and the first victory in Pierre Gasly's career

Scuderia AlphaTauri AT01 by Spark in scale 1:18 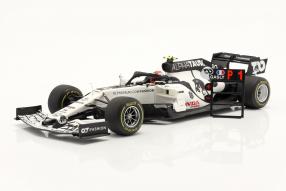 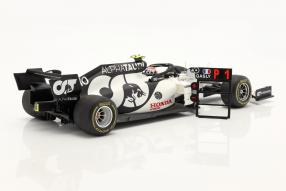 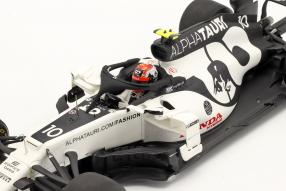 Today, we present a model from Spark in our blog, which was produced from the high quality material resin. It is about the AlphaTauri AT01, with which driver Pierre Gasly won the Italian GP as part of the Formula 1 seaosn 2020. The AT01 is already the 15th vehicle of the team, since it's owned by Red Bull and still the first that was registered under the designation AlphaTauri. The Spark model is based on the original model of the Scuderia AlphaTauri Honda team. Driver Pierre Gasly celebrated his first Formula 1 victory on the AT01 at the Italian Grand Prix. For the team, this was the second victory in team history. Sebastian Vettel had achieved his first victory twelve years earlier at the same place in Italy.

Like all Formula 1 cars in the season 2020, the AT01 has also rear wheel drive. The model of the Scuderia AlphaTauri, which was previously launched under the name Torro Rosso, is the successor to the Torro Rosso STR14. Because the regulations remained stable compared to the 2019 season, the AT01 is a further development based on the STR14. The AT01 is powered by a turbocharged 1.6 liter V6 engine from Honda and a 120 KW electric motor. The paintwork of the AT01 is rather discreet compared to other Formula 1 cars of the season and largely in the colors white and dark blue. The red sponsor stickers of the engine supplier Honda set a color accent on the side. In addition to Red Bull (with the clothing brand AlphaTauri), Casio, Honda, Moose Cider and tire manufacturer Pirelli have placed their advertising on the vehicle.

As the most Formula 1 pilots, Pierre Gasly came to motorsports through carting. Thanks to the Formula Renault, Gasly made it to the funding program of Red Bull. Despite his change to Super Formula 2017, he continued to act as a reserve driver at Red Bull. Gasly also made his Formula 1 debut in 2017 when he competed for team Torro Rosso in the Malaysian Grand Prix. What started as a substitute for regular driver Daniil Kwjat ended with a place in the regular team. Carlos Sainz Jr. left the team in the middle of the season and Gasly inherited his place in the cockpit. In the 2018 season, Gasly won his first World Championship points at the Bahrain Grand Prix with fourth place. After a brief interlude for the Red Bull Racing team, Pierre Gasly returned to the Torro Rosso team and clinched his first place on the podium with a second place in the 2019 Brazilian Grand Prix. In 2020, the Torro Rosso team finally competed under the name Scuderia AlphaTauri, and Gasly's first Grand Prix victory of his career followed in Monza, to which Spark dedicated this model. 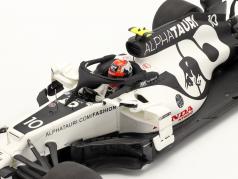 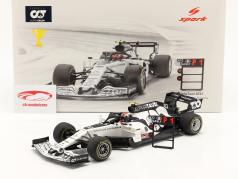