08.12.2021A luxury limousine that was able to make a special appearance on the red carpet at the beginning of the millennium with its V12 biturbo engine and 500 hp 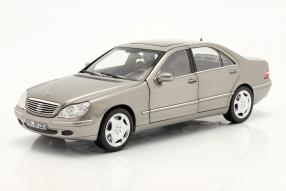 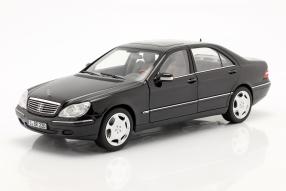 It is the year 2000, the fuel price in Germany is still at about 1€ per liter and it is the time of the luxury limousines, of which the motorization cat't be big enough. Thus also with the Mercedes-Benz S600, which was everything but modestly with its V12 biturbo engine, 5.5 liter displacement and 500 hp. Norev lets now revive this classic in the colors cubanite silver and obsidian black. The engine compartment with the massive V12 aggregate as well as the interior with the then common wood applications are modeled down to the last detail. In addition to the engine hood, the doors and the trunk can be opened at the model in scale 1:18. The front wheels are steerable and the delivery of the Mercedes-Benz S600 by Norev takes place in the usual Mercedes-Benz factory packaging.

At Mercedes, the S-Class with its designation stands for the absolute luxery class from the car manufacturer from Stuttgart. The history of the S-Class started in Autumn 1972 with the appearance of the model series 116, which was named as S-Class for the first time. The shortcut stands for the special class of models at Mercedes. The premiere of the already eleventh generation and thus the continuation of a history with tradition was in September 2020. Until it was replaced by the BMW 7 Series in the last model year, the S-Class of the series 220 was the top-selling luxury sedan in Germany every year. In general, a lot has been revised in the 220 series compared to its predecessor series. The excessively high weight, which has been criticized again and again, has been reduced. The S600 and the AMG variants received the Active Body Control suspension, which was supposed to reduce rolling movements, and many other features found their way into the luxury class at Mercedes.

Further extras were added with the facelift in 2002, which one would normally expect rather in the year 2021 than in 2002. An emergency brake assistant, for example, was also installed as standard from 2002, as was a rollover sensor that was supposed to trigger the head airbags in the case of a rollover. In addition to the safety features, the front bumper and the radiator grille have been enlarged. Clear glass headlights were used at the front and additional indicators found their way into the exterior mirrors. The materials in the interior have become even more elegant and the new monitor with a screen diagonal of 16.5 cm has its place in the center console. Even then it became clear what is still going on today. Namely that a Mercedes S-Class is a car for heads of state, politicians and the stars and starlets of this world. A car that takes care of a special appearance. Anyone who buys the Mercedes Benz S600 from Norev secures model in a scale of 1:18, of which, according to the Federal Motor Transport Authority, only just under 200 vehicles existed in 2020 in Germany. 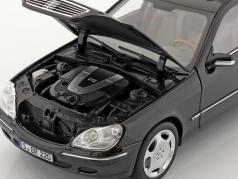 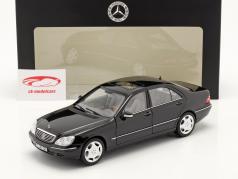 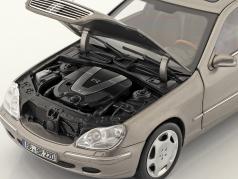 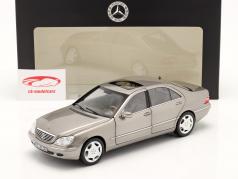