GP Replicas brings a winning model of the F1 World Championship 1979 car of Jody Scheckter, a model car that creates a new trend 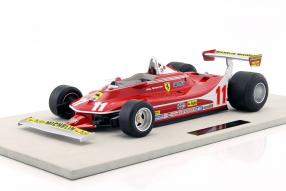 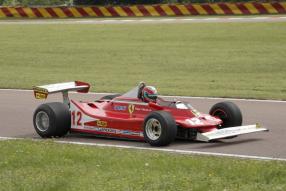 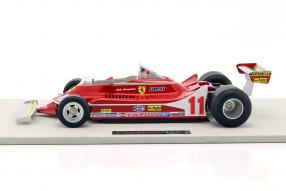 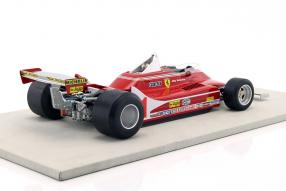 If Sebastian Vettel would like to be named in the same category as names such as Jody Scheckter? Scheckter has achieved something, that Vettel chases after, Or drives after better said, the South African is one of the Ferrari drivers who became a Formula 1 World Champion. In 1979 that was; It would take 20 years to get the Scuderia back to the top with Michael Schumacher. Scheckter, who today runs an organic farm in southern England, won the World Championship at the time in a Ferrari 312T4, which had the number 11 against the no less famous team colleague Gilles Villeneuve with the number 12. And this 12 is now in the large scale model car because GP Replicas delivers in the trendy large scale 1:12. We take a look at the miniature.

The model replica of GP Replicas made from high-quality Resine plastic is a statley 37 cm long, representing the first ground-effect racing car that Scuderia Ferrari has put on the track. For the eyes, which now watches the Formula 1, the oversized panel of the engine looks unfamiliar. The body was narrowly designed, but the V12 drive kit required the look, because of its width, which GP Replicas has knowledgefully and exactly implemented in the format 1:12. Despite the fact that the engine cover can not be removed, quite a lot of the technology can be seen in cars of these years because the intake trumpets and the gearbox are undeveloped, thus offering the fans a lot for the eyes. The 312T4 provides a lot of details and is in this respect an eye-catcher.

This also applies to the front suspension, which the collector can have a good look at under the fairing around the cockpit. The fact that the front wheels are designed to be steerable is rather rare in modellautos of this genre. On this occasion, we would also like to point out the exceptionally good finish that the Model car has. The cockpit is unobstructed, because a driver figure was renounced. The aluminum structure can be seen very clearly in this case as well as in the overrunning bracket; Carbon came into play only in the early 1980s. All in all, an impressive model that fully takes on its role as an eye-catcher only when it has space and is outside a collection. The scale 1:12 - is there a new trend for the Formula 1 models now?

The twelve-cylinder with the 180-degree open V-angle delivered 378.8 kW / 515 hp at 12,300 revolutions per minute. The maximum torque was 323 Newtonmeters (Nm); Road cars with axle cylinders now reach 1,000 Nm. The 312T4 was switched with a five-speed gearbox. Design engineer Mauro Forghieri has placed great importance on the fact that the suspension interfered with the airflow under the car as little as possible. Not a bad concept, as the 312T4 won three races in that season. Scheckter, however, won four points more than Villeneuve in the final, thus securing the title. Sebastian Vettel has since 2015 started to follow in the footsteps of the aforementioned legends. Will it work in the third year? He has a onepoint lead over Lewis Hamilton for the middle of the season, this should be exciting.