Another vendor reduces the racing car, but this miniature gives an insight into the interior. In addition: News from Dubai 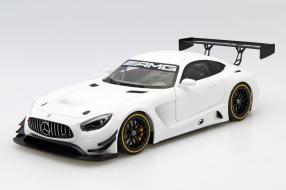 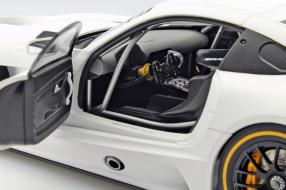 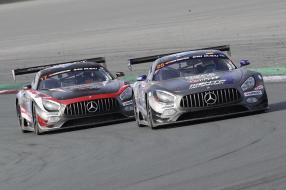 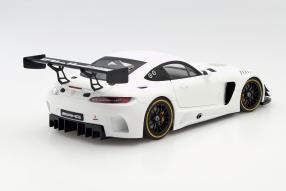 Mercedes-AMG has designed the GT3, an offshoot of the sports car GT for the first time presented in 2014, primarily for customer support. The FIA-GT3-regulations have been delivered to customer teams since the end of 2015, so they participate in sprint and long-distance races. From standard cars, it differs by consistently applied lightweight construction, by the racing gear, a corresponding braking system and the dramatically altered aerodynamics including the monstrous rear spoiler. And a detail that has now also conquered the series versions: the so-called Panamericana Grill. Of course, those cars, which have rang the motor sport year 2017 at the 24 hours of Dubai. Let's take a look at both.

So far, we have seen modellautos for the Mercedes-AMG GT3 in the size 1:18, especially from Norev and Spark: Norev relies on Diecast, Spark on Resine plastic as the material of choice. Both manufacturers do not offer opening doors. This changes for the first time with the GT3 from Autoart - Autoart - in which the collector can open both doors into the passenger compartment. This model is also made of zinc die-casting, comes first in the pure-white version and offers an absolutely harmonious appearance in the performance; In terms of quality, the Mercedes-AMG GT3 sets new standards for this type of car. But in the interior, it is the right thing to do: the instruments, the roll cage, the seats and above all the subtleties like the correct coloring of individual components are the salt in the soup. Quite clear: Of all GT3 in 1:18 is the favorite of the blogger.

But where light is, is also shadow: With all the joy of the functioning doors is a regret about the fact that the engine cover is not to be taken off and we can see thus from the 404 kW / 550 HP strong V8 nothing. We remember the legendary Porsche 956, BMW M3 or Ford Capri from Minichamps in 1:18, which gives the best insights into the racing technology, because the hoods are removable or fold up. We would also have liked the Mercedes-AMG GT3. But, it is, as it is, at least we get the benefit of an interior that is not yet accessible with the Autoart model. Perforated brake discs, yellow brake calipers, ventilation slots in the rear window and the exhaust gas outlets on the sides are other lovingly made details.

The Mercedes-AMG GT3 in Dubai

No question, therefore, that Autoart here a perfect hit has been. And he also seems to have succeeded in the Hankook 24-hour race in Dubai last weekend, with Team Black Falcon joining the Mercedes-AMG GT3 of No. 3 secured third place in the twelfth edition. Two other AMG customer teams took the Top 10 on the Dubai Autodrome in the desert and can also compete with the Hofor Racing Mercedes-AMG GT3 No. 1 celebrate a class victory. Let us wait, which of the now four manufacturers - Minichamps, Norev, Spark and Autoart - will reduce this year's vehicles in the colors of the customer teams for the Sammlervitrinen. We are pleased about the new release of Autoart because it offers new insights.