LookSmart presents a model car to a model that really does not exist. Why that is and the background information - here! 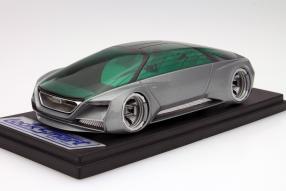 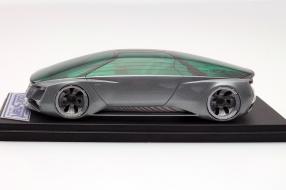 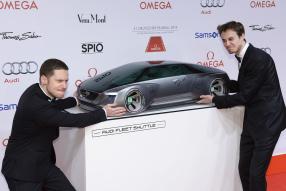 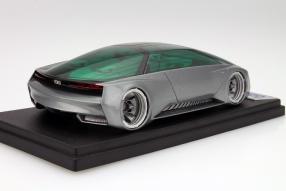 It is not the first time that a created  model car   has never found its way to our streets. This is  the case of the Audi  Fleet  shuttle Quattro Concept, which is presented by the Italian model car maker LookSmart. The model available under item no LSAUDIFQC is a small series model  made from resine plastic in gray metallic. The  virtual car which  the Audi Design Team referred to as a futuristic, progressive and advanced was realized for the Summit Entertainment film adaptation of the bestseller "Ender's Game" .  The Audi Quattro Shuttle Fleet blends in the world of science fiction  with its visionary design, it  combines  the  futuristic design with trendsetting technology according to the makers.


The original to the model of the LookSmart car

For the first time, actually, there has been an Audi  in a Hollywood production purely virtual. "The Audi in the film stands for progress and shows up in specific key scenes that characterize the life of the protagonist sustainably," said the marketing manager of Audi AG, Florian Zitzlsperger: "With that our Audi is part of the fictional world." At the premiere in the Chinese Theatre in Los Angeles, the sci-fi car shoneon the red carpet  beside the main actors Harrison Ford, Asa Butterfield, Hailee Steinfeld, Ben Kingsley, Viola Davis and Abigail Breslin- of course not in size. For the film's release, the Audi design team built an illuminated 1: 4 model, that also showed up at the 41st Film Ball in Munich with director Marco Kreuzpaintner and Max Dyer . But how was the car made, which was driven by Harrison Ford aka Hyrum Graff?

The Audi designers were working without a physical model and designed the car at  first fully on the computer. During the filming, the actors drove an Audi A7 Sportback. In the post-production  Digital Domain - the company  responsible for the special effects -replaced  the A7 with the  digital Audi Quattro Shuttle Fleet using computer-generated imagery  . "It was a very special moment for me, to see our Sci-Fi Audi on the big screen," says Björn Wehrli from the design team, which drew inspiration for the progressive design from the futuristic world of film from director Gavin Hood  , "We have created a car for a world in about 75 years, which fits perfectly into the high-tech atmosphere of the film." The 1: 4 model was later given a place of honor in the Audi Design Studio.


"Ender's Game" was created by the director  Gavin Hood


The adventure "Ender's Game" is based on the award-winning, best-selling novel. It was filmed from a screenplay and directed by Gavin Hood. In the near future the Earth is under attack from hostile aliens. In preparation for the next attack, people start to train the best students to find future leaders among them. Ender Wiggin, a reserved but brilliant young man is taken out of school in order to become part of the elite. He is soon chosen as the new great hope of the military and to lead his colleagues in an epic battle that will determine the fate of the earth. Summit Entertainment financed the film together with OddLot Entertainment.  To get  the small-scale model at the price of 124.95 euros sure takes less effort.