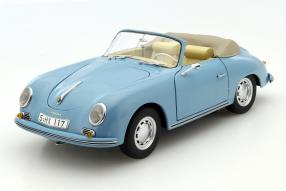 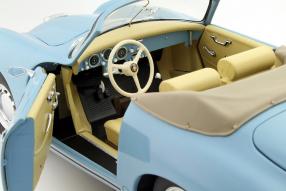 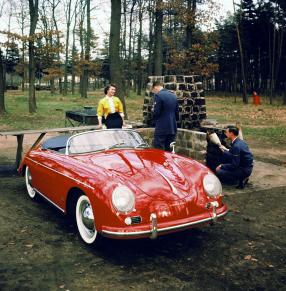 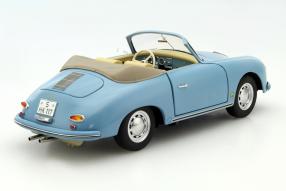 One thing you have really have to give it to the model car manufacturers: They understand it perfectly, keeping in cooperation with the car manufacturers, the memories of former times awake. At times at which of GT3 RS and similar spektakukären Abbreviations has not yet been thought. Since handed a simple A behind the construction number 356, and finished was the type designation. In this case, for the Porsche 356 A, the second generation of the sports car to the Schuco provides us with a light blue, really fantastic model car in the showcases. In 1:18 the built of zinc die cast miniature has everything the collector's heart desires: to open doors and hoods, detailed features of trunk and engine compartment and of course an interior that the modesty of the time - or the luxury of its time view - perfectly traces.

Looking back on the program 356 A

The Porsche 356 is the first production model of Porsche. As birthday of the Porsche 356 applies the 07 July 1948 at which the first report was published about a Porsche Coupé. As in April 1965 ended the production of the 356 series, exactly 76,302 cars were delivered. The variant 356 A was built from October 1955 to September 1959 as a convertible, coupe and speedster or since 1958 as a Convertible D, also from 1958 as a so-called hard top non-removable roof. These Convertible D version differs from the Speedster by a higher windscreen, a hood with a larger rear window, the crank windows and the normal aufgepolsterten seats instead of the bucket seats. Incidentally, there is a parallel here to the pagoda from Mercedes-Benz, has been brought to the Norev an equally beautiful model.

This conceived as a pure roadster two-seater with the trade descriptions 230 SL, 250 SL and 280 SL was produced in 1963 and in 1971 and was available with an optional hardtop with the so-called California version with hardtop without top compartment and hood, but a continuous rear seat was sold. Mercedes-Benz has made this version as "special version without Roadster soft top with an enlarged rear" in the price lists. Using the Embedded here link you also can watch the fabulously beautiful model of Pagoda. In a glass case there would have to be ordered in a similar light blue in addition to the Porsche 356 A. Especially the detailing play at the same level. Intricate ventilation grille on the front apron and as part of the hood, just such mirrors and wipers shining chrome.

Much Silberglanz there are at the controls on the door linings as well as the switches and instruments of the above-padded dashboard. Under the luggage compartment lid of the Porsche a spare wheel with fastening belt and the tank; in the rear of the slumbering small motor whose model 1600 in the base 44 kW / 66 hp and 1600 S 55 kW / 75 bhp. As 1600 Carrera de Luxe - ah, so it starts with the spectacular reference numbers - generated the four-cylinder 77 kW / 105 PS. The top version of the boxer engine was stuck in 1500 GS Carrera Gran Tourismo: 81 kW / 110 PS. The engine is modeled on really meticulous in our model car. Of this, the collector more than the fully enclosed drive sets modern sports car. And so we find ourselves just at the beautiful models of the 1950s and 1960s into raptures. You too?

PS: A lot of impressions on the Porsche 356 there are in the great reportage Deutsche Welle that we have embedded above.