13.08.2016Nothing planned on sonnday? Then off to the Oldtimer Grand Prix

At the 44th AvD Oldtimer Grand Prix is where the heart of the German classic car fans are this weekend: ck-model cars is also there. So: hurry, lets go! 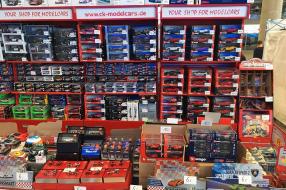 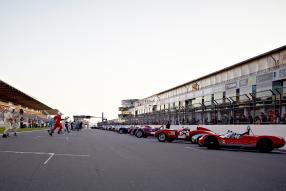 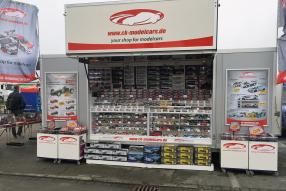 Ck-model cars is represented with three stands at the ongoing 44th AvD Oldtimer Grand Prix at the Nürburgring: Am Ring Boulevard with the main stand, in the paddock opposite the Medical Center with the sale Trailers and AvD fan shop opposite the parc fermé. Until Sundayaround 500 historic racing cars will make rounds around the Nürburgring; the Mecca for classic car fans. From the sports cars of the 1920s and the Formula 1 cars from the 1960s to the 1980s, is the full range of sports cars, prototypes and touring cars, single-seaters and GT spanning seven decades at the start. As highlights the Nürburgring GmbH decares the strong field runs the FIA ??championships for historic Formula 1 racing cars and sports cars of the 1960s and 1970s.

Included are eight of the legendary supercharged Mercedes models, draw attention. Among them is the race car, with the 1927 Rudolf Caracciola took victory in the opening race of the Nürburgring. On Saturday night it goes for the two seated racing cars and GT from 20:20 to dusk in. Even in the sports car category, the organizers are pleased about full starting fields with remarkable vehicles. A special highlight is the field of pre-war cars: The "Vintage Sports Car Trophy & The ASC Trophy" is a unique collection of more than 40 racing cars. The Jaguar Classic Challenge presents E-Type & Co .; start in the race of the Stena Line Gentlemen Drivers GT to 1965. The Touring Car Revival is designed for former DTM, ITC and STW cars.

Klaus Ludwig at the start


Among the most popular race of the weekend include the Revival German Racing Championship. Ex-DTM drivers like Klaus Ludwig (Porsche 930 Group IV of 1979) and Ralf Kelleners (De Tomaso Pantera 1975) race here as well as pilots from the World Sportscar Championship (FIA WEC): André Lotterer, otherwise Audi works driver the R18, will start on a 25-year-old Audi 80 Coupe 2.0. Stefan Mücke - who drives in the WEC, the modern version of the legendary Ford GT - sets with his father Peter Mücke a two Ford Capri in 1974 and 1980th The program of the AvD Oldtimer Grand Prix include not only race cars. is again this year at the event, a large automobile club meeting on to the more than 1,500 vehicles are expected, in the outer regions (parking A2, B2 / B2a, B4 and the Eifeldorf) can be found.

Two dozen clubs bring with cars like the classic BMW 02 series, Matra, MX5, Triumph, Volvo P1800 and many more. Porsche Classic pops thier tent In the Mercedes Arena . In addition to the acclaimed transaxle models here are many other classic Porsche to be found. The Stuttgart celebrate 40 years of transaxle models with a large parade on the Grand Prix circuit. In leading vehicle then takes racing legend Derek Bell Place. On Saturday follow vehicles of Opel's motorsport history (12:45), which include the legendary Cliff-Calibra counts. At the wheel: DTM veteran Joachim 'Jockel' Winkelhock. Event partners MotorKlassik will be present with reader runs on the Grand Prix circuit and the Nordschleife. So, the weather is great: Pack up your family and visited the Nürburgring and us, the team of ck-model cars!