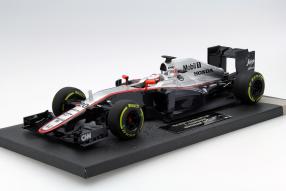 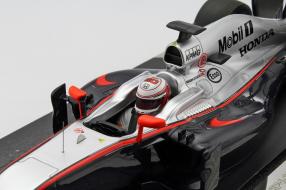 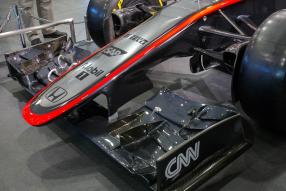 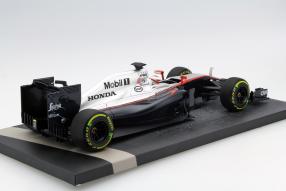 Internet users and Friends of our Blogs have long known under the hashtag throwbackthursday the network community is reminiscent of beautiful events of recent times. As far back is the use of the McLaren MP4-30 from the Formula 1 2015 season, not yet, but a model as Model car available for the comeback of Honda in Formula 1, which is quite welcome. The Japanese automaker and engine supplier dominated by McLaren in the years 1988 to 1991, the Formula 1, rose after the untitled 1992 season again. Honda engines provided the power that helped Ayrton Senna to his world titles. Minichamps reduced with the model car driver Button and Magnussen the first New Honda in F1.

Looking back to Australia in 2015

That the model car named Magnussen, but the fact is owed that it reflects the state of the race MP4-30 in Australia, because only there Kevin Magnussen took place in 2015 in McLaren. He replaced Fernando Alonso, who was not allowed to start after a previous accident before the season starts. But the year did not start as desired: In the qualifying session Button and Magnussen were the slowest driver; their best times were more than five seconds on the pole time of Lewis Hamilton. Magnussen's car fell on the way to the starting grid with a technical fault from. Button came in 11th place as the last and with two laps behind winner Lewis Hamilton finish.

The McLaren MP4-30 is the 43rd race car for the Formula 1 McLaren and was presented on 29 January 2015 Woking. The presentation was live on the internet. The nose was adapted to the provisions of the regulations according to the car, which is only been an evolution from the previous year. Peter Prodromou was the designer responsible for the car. Characteristic: The air inlet above the cockpit is bisected by a horizontal bar; two additional air intakes are located directly below. All coolers are very much attached to the front page boxes, so this turned out very shortly. The Honda engine is a newly developed 1.6-liter V6 with a turbocharger and is called RA615H.

With 27 points, the import of the MP4-30 in the 2015 season, was no longer there than the 9th place in the Constructors' World Championship. For McLaren a disaster. Nevertheless, the model car is of course in any collection of Formula 1 is an important milestone because it represents the re-entry of Honda. Minichamps delivers the Model car made of the main material resine a perfect piece of model engineering, which is better by far in the finish and quality, as his role model. The elegant paint makes it a highlight in the showcase. After the Grand Prix of Austria of 03 July 2016 it is clear that McLaren-Honda itself still needs to improve: As the 7th Place the Constructors' Championship is currently in it; 32 championship points has been brought MP4-31 until the successor.