Triple 9 presents the model car, a limousine, whose prototype has the makings of a classic. We look at the model and market situation. 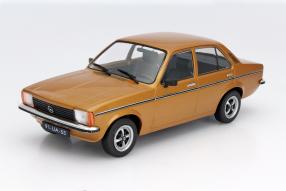 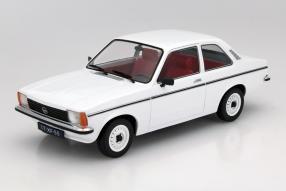 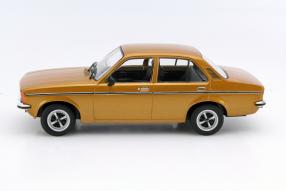 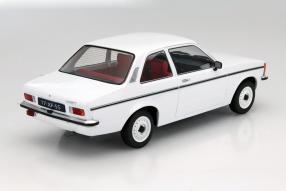 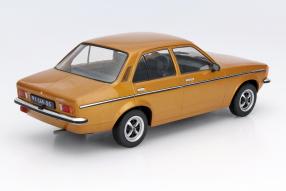 The Opel Kadett C was the fourth Opel with this name and the third car built with this name after the comeback of naming 1962. The model linie was built in 5 Karosserie variations from 1973-1979; 1.6 million Kadett C were sold. Apart from modifications to the front axle and tank of the Opel Kadett C2 based on its predecessor Kadett B, was thus equipped with longitudinal engine and rear wheel drive. Triple9 has made this very much 'still very harmonious, very timeless styled car a very nice plastic model that accurately reproduces the lines of the model: covers the appearance of here with optional 2 and 4 doors equipped and the facelift version C2 corresponding model perfect with the 1977 presented in this form model.

Evident is the facelift on the revised Front: The still very successful Opel-people have arranged below the bumper turn signal upwardly outwardly moved to the headlamps and ensure a fresh and clearer optics. We like the Kadett this series very well, because he does not act out of date today; clean lines have managed to leave the Cadet C2 look timeless. When just now in Essen Techno Classica, which ended the sedan, but also the rare convertible version Aero were traded as classics coming. Who wants to add itself a classic vehicles, does not always expect high cash expenditures: For 6,000 euros you get in general, very good to restored Cadet C2 sedans.

And that gets the buyer or the buyer an unpretentious and uncomplicated car that can be kept fit for everyday use without much effort. Approximately 10 pieces we have today found at mobile.de which equipped with H-plates in very good condition are looking for new owners. The most widespread is the version with 44 kW / 60 hp, sufficient certainly in urban driving and for weekend getaway because of an unladen weight between 800 and 900 kilograms, the small four-cylinder less with them lugging than current Opel Astra, its curb weight of around 1,300 kilograms is given. Of course, also lacks a lot of safety equipment, but the many classic cars fans can live with it.

A great base for a 1970 collection

We appreciate that there are many enthusiasts who maintain the old, beautiful bread and butter cars alive; not only 911 have deserved to be preserved. Therefore, we find it's great that label as Triple9 builds shapely and also in the interior correctly corresponding modeled small series models, which are reminiscent of the once coveted family cars. The presented Cadet C2 is to have in 3 colors and could serve as a basis for a collection that is based on the success of cars of the 1970s. Incidentally, not VW invented the GTI: As early as 1975, a year before the Gulf GTi, Opel presented the Kadett GT / E a shapely coupe, which introduced the principle of the good family car with a powerful engine on the head.


Our tip for this weekend: The Jim Clark Revival is an exceptional vintage motorsport event with spectacular historic touring cars, prototypes and formula racing at the Hockenheimring in Baden-Württemberg. Visit us there from 15 to 17 April 2016! And: We are now on Twitter: https://twitter.com/CkModelcars