The small series label, the model in 1:18 scale of a vehicle whose prototype should in turn reminiscent of an early aerodynamics champion. 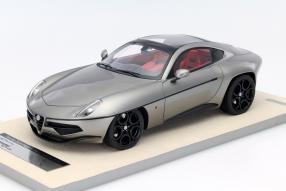 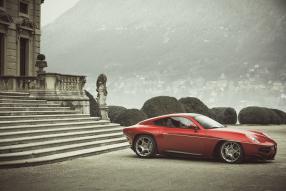 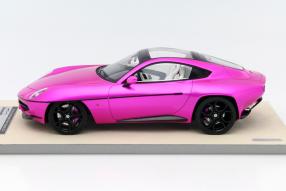 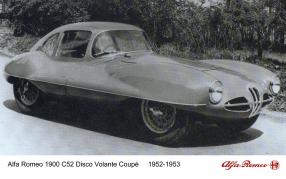 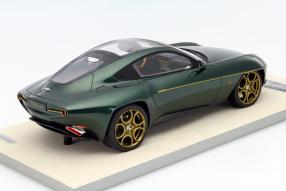 In 2013, the reminiscent of the Italian coachbuilder Carrozzeria Touring Alfa Romeo Disco Volante was the eye-catcher at the Pebble Beach Concours d'Elegance. The model for today presented model car was built on the platform of limited sports car Alfa Romeo 8C Competizione and should remember the eponymous racing cars from the 1950s, the corporate owner and designer of Carrozzeria Touring - Bianchi Anderloni - was designed as a coupe and roadster, but not been victorious. However, the racing car is a milestone, because he did talk to a drag coefficient of 0.30 by its aerodynamic shape of your face. Hence the name came DiscoVolante what to German means flying saucer.

Reason enough therefore to transfer the former concept to a current study, which is the Alfisti manages in a fascinating way. The delicate lines and the circumferential edge trim has been transferred to the model for our model; although 60 years separate the two drafts, the design language is the same. Whoever the then and today's Disco Volante closer look, immediately recognizes the great importance of the windows of coupes for the design concept, which is crowned in the study of 2013 by a glass roof. On the side of the exhaust pipe original design recalls an expression of the rocker panel, which was made of carbon. A material that fits very well to the model of car Tecnomodel coming resine plastic to the collectors.

The small-Label brought the Alfa Romeo Disco Volante in 3 colors on the market that are limited differently for themselves. The model in the screeching Pink almostknocked us from the desk, so frightened when we were given this rare color choice: It is only 75 times available under the article number TM18-15D. The model car in silver, however, is relatively civil, but also to have only 75 in triplicate (TM18-15C). therefore Really sexy comes the third version, in British Racing Green with a very nice surrounding, gold stripes. They can be bought at the number TM18-15B 90 times; to 219.95 euros, as in each case the other two versions. In this variant, the interior is colored very harmonious.

The technique takes the Alfa Romeo Disco Volante from the Alfa Romeo 8C Competizione, which is powered by a 4.7 liter V8 engine with 331 kW / 450 hp and connected by means of a six-speed automatic. The drive set a maximum torque of 480 Newton meters (Nm). As customary in the small-car models resine plastic remain doors and hoods of the Disco Volante closed. Thus, the engine of the chic coupé we see nothing but to rejoice in the finely worked out details of the model. This includes detailed modeled brake system, the inner workings of the headlights, the fittings with two-tone steering wheel, and carefully modeled front apron along with the spoiler in carbon. In the above-embedded video of Gumbal you can watch the model to the model view in detail again and listen. Have lots of fun with it!


And last, but not least: Have a nice weekend, we wish you!