How Norbert Singer's team took an extraordinary path to transform the Porsche Carrera RSR into a racing car. 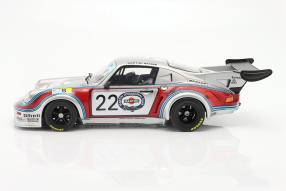 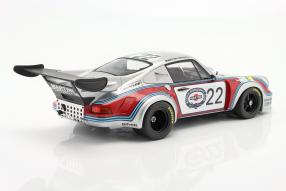 In the early 1970s, Porsche decided against pursuing an expensive racing program because of financial reasons. The plan was that the team around Norbert Singer should run factory sports on a small scale with the Porsche 911. At that time, no one at Porsche could have guessed that a little more than a year later they would compete in the 24-hour race in Le Mans in 1974 and take second place. In today's blog article, we want to devote ourselves to this milestone in the history of Porsche and draw attention to the models that the label CMR has created in scale 1:12 exclusively for ck-modelcars and modelissimo. The models were made of high-quality resin and are in no way inferior to the level of detail of the original in the Martini Racing design. Both the car that took second place at Le Mans in 1974, driven by Herbert Müller and Gijs van Lennep, and the car in which Manfred Schurti and Helmuth Koinigg started can be ordered. The collector also gets a real eye-catcher with the scale 1:12. The models have an impressive length of 39cm and are 17cm wide. A place of honor far away from the usual showcase is actually pre-reserved.

After the decision was made at Porsche, as already mentioned, not to launch an expensive racing program, since this would require a prototype with a 3-liter engine, factory racing with the 911 was the only option. This initially included use in the one-make world championship and an engagement in the American Can-Am series. As a test, however, a European Rally Championship run in Corsica was on the program first. The event allowed the use of the not yet homologated vehicle and only took place on paved roads without gravel. Even if the use was crowned with little success, one could gather the first experiences with the car. On the way back, they used the new track Paul Richard for the first real tests under racing conditions, which was opened two years earlier. The fenders of the RSR were already cut out there to accommodate the wide rear tires that are so characteristic today. In February 1973, the first long-distance use followed at the 24-hour race in Daytona. Since the RSR was still not homologated, Porsche started with the prototypes in Daytona. After a few failures of the favorite Matra, Porsche ended up with first and second place on the plus side. Both vehicles used were then overhauled in Weissach and prepared for the season in Europe.

While the Porsche, which has since been homologated, started in the GT class in the first race of the 1974 season, they switched back to the prototype class in the second race. Spoiler and tire sizes were almost unlimited there and it was easier to test new add-on parts. As always, Le Mans was on the program at the end of the season. The Carrera RSR 2.1 Turbo was the first turbocharged racing car to compete in Le Mans. On the morning of the second day, Porsche was second behind Matra. But then the fifth gear broke on the car of Herbert Müller and Gijs van Lennep. Since you would have had to remove the entire engine to get to the gearbox, you drove on with four gears and hoped that the fragments in the gearbox would not cause any further damage. In the end, the car withstood the high stress and finished second overall after 24 hours. This was a huge success for the 911 and Porsche, which started as prototypes. 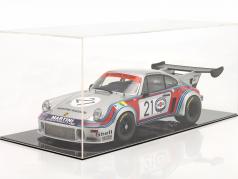 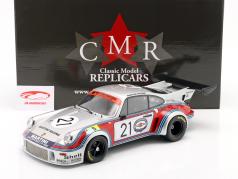 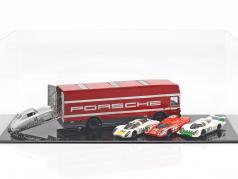 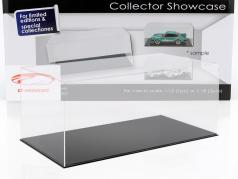 High quality showcase for 1 Modelcar in scale 1:12 or 2 modelcars in scale 1:18 black SAFE