In 2016, Ford came back to Le Mans with a new edition of the Ford GT - exactly 50 years after the first victory of the legendary predecessor, the Ford GT 40. The entry into the GTE Pro-category went well. The car won straight away. 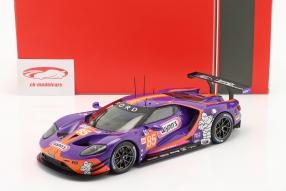 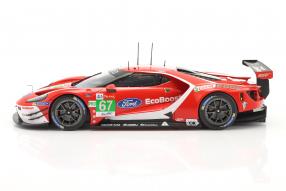 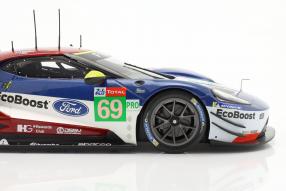 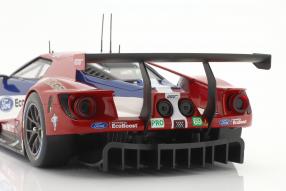 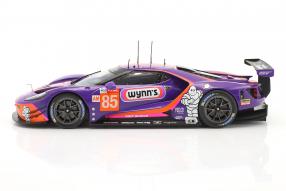 Three further podium successes followed at the endurance classic event until the end of the programm in 2019. For the farewell race, the factory Ford GTs with retro designs moved out to commemorate the previous successes. In addition, a Ford GT started for the first time in the GTE Am class, in which gentlemen drivers and professionals take turns behind the wheel. Model manufacturer Ixo has now released a selection of some Ford GTs from different years in scale 1:18.

Among other things, the red and white Ford GT with the starting number 67 from 2019 is available. The retro design is a tribute to the winning car from 1967. Dan Gurney and A.J. Foyt won back then in a red GT40 with white stripes. Andy Priaulx, Harry Tincknell and Jonathan Bomarito were still on the lead lap when they crossed the finish line, but in the tight GTE Pro field they couldn't do more than fourth place. This made the red and white Ford GT the best-placed of the four works cars.

In the car with number 68, Sébastien Bourdais, Joey Hand and Dirk Müller steered their own retro design around the Circuit de la Sarthe. In 2016, the trio had brought in the premiere victory of the Ford GT with that blue, white and red outfit. The 2019 edition, on the other hand, ended frustratingly. The car was originally the best Ford GT in fourth place, but was later removed from the classification because the tank capacity stipulated in the regulations was exceeded.

The year before, the vehicles had no retro designs, but the blue-white-red standard colors, which were used since 2016. Compared to the 2016 design, however, the darker red tone can be seen. Driving the number 69 car were Ryan Briscoe, Richard Westbrook and Scott Dixon. This vehicle is also available as a model.

From 2016 to 2018, Ford sent four works cars into the race. In the farewell year 2019, a privately used vehicle driven by the American Ben Keating was added in the GTE Am category for the first time. In the striking design of Wynn's, a supplier of engine additives, Keating crossed the finish line as the winner with his teammates Jeroen Bleekemolen and Felipe Fraga. As with the works car with the number 68, however, the tank capacity was too large, so that Keating Motorsport was also excluded from the classification. Ixo also has the only Ford GT ever to compete in the GTE Am class.

The four models are not only high quality memorabilia on the Ford GT and its legendary predecessors. But they also remember the peak of the GTE-category at the 24 Hours of Le Mans. With Ford, Ferrari, Porsche, Aston Martin, Corvette and BMW, up to six manufacturers were at the start and the fields were full. The GTE Pro-class will be discontinued at the end of 2022. Until the switch to GT3 cars, only the GTE Am-category will continue. 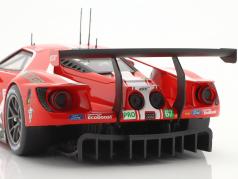 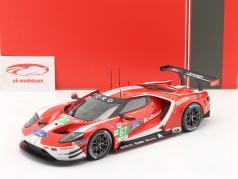 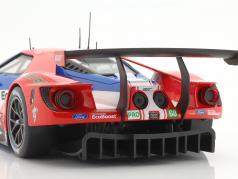 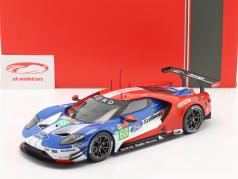 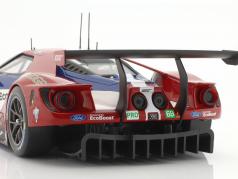 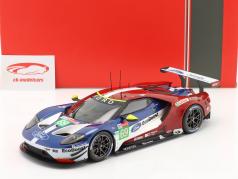 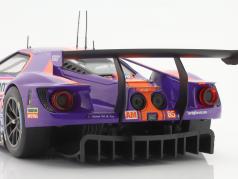 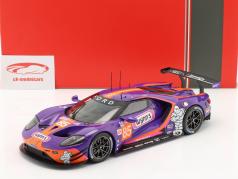