06.10.2022Limited sports convertible with removable hardtop from iScale in scale 1:18

We present the Mercedes-Benz SL63 AMG in two different colors from the label iScale. 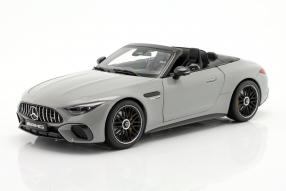 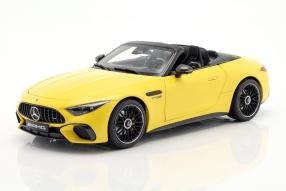 The new Mercedes Benz SL63 AMG is justifiably promoted as a new edition of an icon by Mercedes. The eighth model generation of the roadster was released in October 2021. The SL63 AMG is equipped with 4-Matic all-wheel drive as standard and also has all-wheel steering. For the first time since 2001, Mercedes uses a fabric top, reducing the weight of the sports convertible by 21kg. Still, the R232 ends up being a bit heavier than the previous model. In addition to this soft top, which can be removed from the model in scale 1:18, the label iScale has also reproduced all other details of the model in the usual quality. The trunk, the doors and the hood of the model can be opened. This opens up the view of the detailed engine compartment and the detailed interior fittings. Another highlight are the steerable front wheels of the model. If you want the SL63 AMG from iScale, you have to choose between the colors sun yellow and alpine gray. Both colors are limited to 1000 models each.

With the production plant in Bremen, Germany, the SL63 AMG actually remains "Made in Germany". In addition, it is a real novelty that Mercedes has completely shifted the development responsibility for the SL to AMG in Affalterbach this time. Because of this, the roadster actually appears as a Mercedes-AMG. However, this should benefit the sporty nuance of the convertible rather positively. It continues a long tradition as the new "SL" model series. Technically, it is the basis for the new AMG GT, of which there will no longer be a roadster, and it replaces a bit of the gap that the currently non-existent S-Class Cabrio has torn in the Mercedes model range. From a visual point of view, many things have remained the same at first glance. The overhangs of the predecessor have shrunk somewhat, but the characteristically long bonnet has remained, which makes it look shorter despite the longer wheelbase. However, this is by no means the case, because the R232 is seven centimeters longer than its predecessor. The eighth edition of the oldest Mercedes series is specified as a 2+2 seater, but on closer inspection it is more of a real 2-seater. Travelers should rather use the space behind the front seats to stow luggage, because the convertible with 213 liters of storage space with the top down is rather less lavishly equipped.

Until the appearacne of an announced hybrid, which will wear the name SL63E Performance, the SL63 AMG represents the most motorized cabriolet of Mercedes-Benz. The SL43 version is equipped with a four-cylinder engine, while the SL63 AMG comes with a V8 engine. The unit delivers 585 hp and manages the sprint from 0 to 100 kph in 3.6 seconds. The Roadster thus reaches a maximum top speed of 315 kph. In the SL63 AMG, the characteristic AMG V8 sound comes from four trapezoidal tailpipes. If you like it sporty, you can configure the optionally available aero package. The package includes flics and a larger rear diffuser. But otherwise, you can let off steam properly in the surcharge list. Performance bucket seats, carbon inlays and red seat belts are just a few examples of what you can find there. 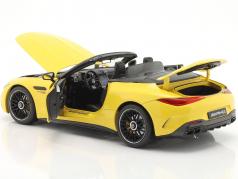 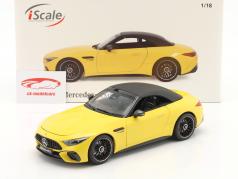 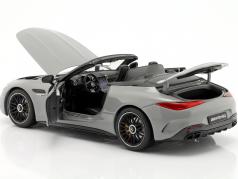 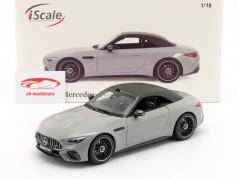