Formula 1-fans will be happy anyway when the cars from the current racing season finally appear as models in autumn. In 2022, however, the anticipation should have been particularly great. 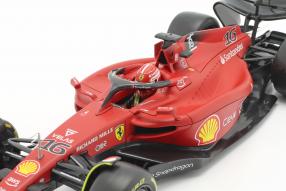 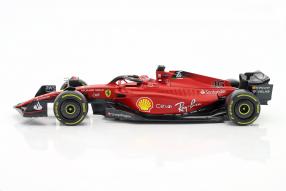 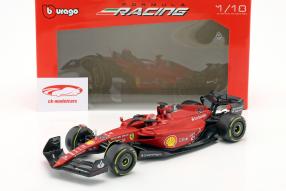 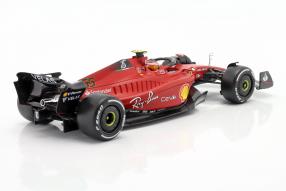 In the previous years, Formula 1-vehicles - and thus also the models - looked very similar. But with the changings of the technical regulations for the season 2022, the optics of the cars changed noticeably after a some years. Now the first miniature variants of the renewed Formula 1 generation have arrived in our shop - above all from Ferrari.

When Ferrari presented its new Formula 1-vehicle on February 17th, the enthusiasm of the fan community was great. This was not only due to the still unusual, spectacular look. Many were reminded of the design of the 90s. An impression that was no coincidence, because for the first time since 1996 the front and rear wings of the 2022 car are completely black again.

The start of the season was also reminiscent of glorious times. After two years without a single win, the Scuderia achieved a double success at the opening event in Bahrain. After a spectacular duel against world champion Max Verstappen in the Red Bull, Charles Leclerc prevailed and successfully started the season with his third Grand Prix victory. In the closing stages, Carlos Sainz grabbed second place from Max Verstappen's ailing Red Bull. For Ferrari it was the first triumph after 45 races without a win. Most recently, Sebastian Vettel won the Singapore Grand Prix in 2019, back then also as a double victory with teammate Kimi Raikkonen.

The double victory in Bahrain of Leclerc, Sainz and the Scuderia put the Ferraristi around the world in euphoria. Ferrari finally seemed to be able to drive for the world championship again - and not with dominating boredom, but with a hard fight against the reigning world champion  Red Bull. Looking back, a YouTube user writes in the comments under the highlight video from Bahrain: "The race that got Ferrari fans dreaming...".

It should be a short dream. After another close repartee between Leclerc and Verstappen in the second race in Saudi Arabia and Leclerc's victory in Australia, Ferrari gradually lost touch with Red Bull. Halfway through the season, Carlos Sainz celebrated his first Grand Prix victory and a week at Silverstone later Charles Leclerc followed in Austria with his third win of the season. But durability issues and tactical missteps meant Ferrari had all but lost the World Championship by the time the modelcar went on sale.

Bburago released the F1-75 in scale 1:18. Both Charles Leclerc's car and Carlos Sainz's car are available with driver figures sitting in the car. In addition, the cockpit is faithfully reproduced and the front wheels are steerable.

The 2022 Ferrari will no longer be a world champion car. But it's worth collecting for one reason alone. It is "the car that got Ferrari fans dreaming...". 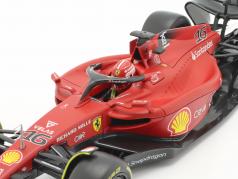 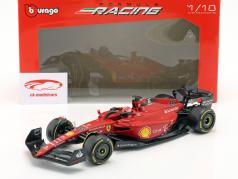 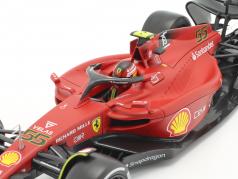 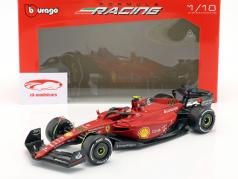