2-car set Red Bull RB 18 in scale 1:43 by Minichamps with the models of Max Verstappen and Sergio Perez 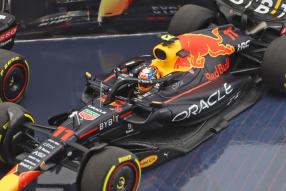 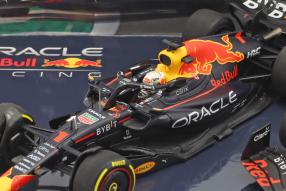 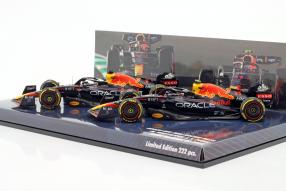 The Saudi Arabia GP in the Formula 1 season 2022 was the second race of the season and took place on March 27th, 2022. Sergio Perez should definitely remember this day. The Mexican drove the fastest time in qualifying and secured his first pole position in his Formula 1 career. In the race he finally finished third. His teammate Max Verstappen started the race in fourth place, but was able to finish victorious in first place. Minichamps has modeled the cars of the two drivers of the Red Bull team into scale 1:43. The set, in which both cars are presented, is a limited edition of 222 pieces, which was made exclusively for ck-modelcars by Minichamps. The two Red Bull RB18 are based on the originals in detail. The two drivers Verstappen and Perez are also shown in the model. Minichamps has even shown the different helmet designs true to scale in the usual quality.

At the start of the 2022 season, Red Bull started the season with Max Verstappen as the defending champion. The year before, the knot had finally burst and the world championship could be taken home. The world press and the competition then looked rather critically at the unveiling of the RB18 model, which is planned for the 2022 season. In 2021, Red Bull had been working on the previous model for a very long time to ensure the championship, and the assumption was that important resources were withdrawn in the development of the RB18. It was then even more exciting to see what the start of the 2022 season would look like for the defending champion. In any case, the goal of “title defense” had been declared. For the summer break of the 2022 season, everything looks as if the team around Max Verstappen can achieve this goal again. At this point, Verstappen is in P1 with a total of 80 points ahead of second-placed Charles Leclerc. Things are also looking more than good for the Red Bull team in the Constructors' Championship. There you even lead with 100 points ahead of your competitor Ferrari.

Red Bull is simply breaking new ground in the season 2022. It is constantly being optimized and new parts are constantly being added to the racing car. At the beginning of the season, the RB18 was said to have a lack of reliability, too much weight and disappointing results in qualifying. But at Red Bull they have such a good feel for voting that the table of the world championship does not share this picture. At the second race in Bahrain, the RB18 already got new sidepods and a modified underbody. In the end, the Milton Keynes team has nine wins in the first thirteen races of the season. Defending champion Max Verstappen has a car and a team at his side that make it easy for him to win. His team-mate Sergio Perez may be overshadowed by the world champion, but he can still show what he's made of with a pole position in Saudi Arabia, a win in Monaco and a total of six podium finishes in the first half of the season. In doing so, Perez scored important points for Red Bull in the battle for the constructors' championship. In summary, one can already speak of a clear dominance of "the Bulls" team in the season 2022. If there are no more unexpected technical failures, Max Verstappen should already have a hand on the trophy and, combined with the performances of his team-mate, also ensure Red Bull's victory in the constructors' championship. 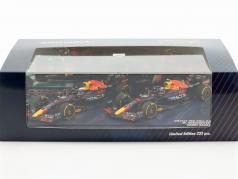 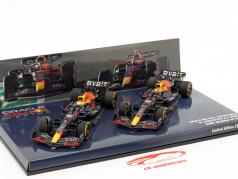