For the glamorous Monaco Grand Prix, McLaren dressed up in a special way in 2021. Lando Norris and Daniel Ricciardo came to the track in a legendary Gulf design with their MCLM35 for the highlight of the Formula 1 calendar - with success. 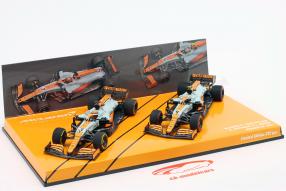 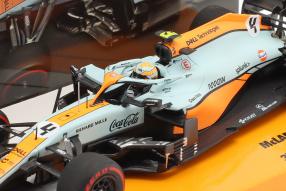 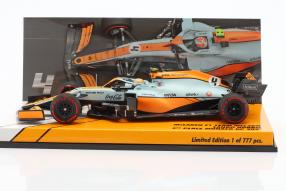 In the principality, Lando Norris stood on perhaps the most coveted podium of the year as third. Minichamps released the both blue-orange McLaren in scale 1:43 - in different versions and strictly limited.

Who sees a blue-orange race car, often thinks on Gulf. And this for a reason. The oil company was founded in 1901 in Pittsburgh, USA. In the 1960s, the company launched a marketing offensive with numerous sponsorships. This also included involvement in motorsport. One of the Le Mans-winning Ford GT40s sported the Gulf livery, as did Steve McQueen's Porsche 917 in the endurance classic film. And because Gulf always participated in the racing business, even under new ownership, the designs never died out. The McLaren and Gulf Formula 1 teams have maintained an intensive partnership since 2020.

So, no wonder that the Gulf design had attracted attention in Monte-Carlo - especially at Lando Norris with his third place. The Brit had qualified as the fifth fastest, but was fourth at the start. Pole setter Charles Leclerc had a part of the drive shaft fail on the way to the starting grid and the Monegasque just had to watch his home race. When Valtteri Bottas then retired after a failed pit stop, Norris was flushed to the last place on the podium, which he defended against Sergio Perez's Red Bull to the finish. For Norris it was the third podium finish in Formula 1. The resin model in scale 1:43 of the successful car is limited to 777 pieces exclusively for ck-modelcars and comes with a high-cover collectors packaging.

In addition, a 2-car set with both McLaren in Gulf design is available, also exclusivley for ck-modelcars and limited to 222 pices. Both cars are positioned next to each other just by a few centimeters - different from the race. While Lando Norris drove to the podium, Daniel Ricciardo finished with place twelve outside of the points and was even lapped by his stable mate. However, this did not dampen the enthusiasm of the Formula 1 fans for the Gulf design. 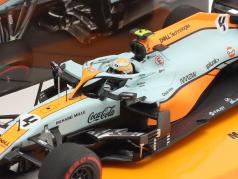 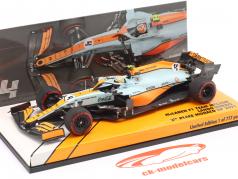 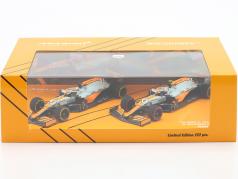 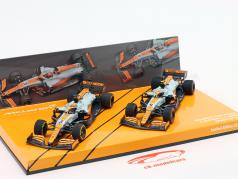