26.05.2022In today's blog: The only Audi RS4 that was available as limousine and convertible 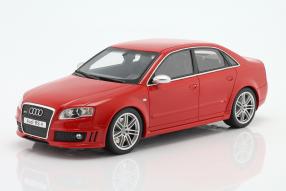 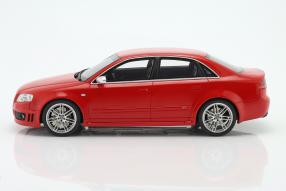 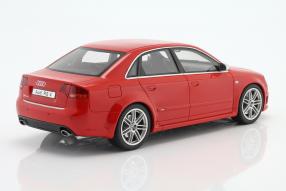 The manufacturer from Ingolstadt launched the second generation of the Audi RS4 with the Audi RS4 B7 in 2004. The biggest difference to its predecessors is basically that the RS4 was available as limousine and even cabriolet in addition to the normal Avant (estate car). The modelcar label Ottomobile has included the RS4 B7 in the version of an estate car in Misano red in its range. Details such as the silver rear-view mirrors typical of the RS models were implemented by OttoMobile, as were the RS4 rims, which were the most common at the time. The “RS4” lettering is proudly positioned on the front, rear and side trim strips. Other details such as the oval exhaust pipes, the chrome applications on the window frames, the frame of the radiator grille and the numerous honeycomb-look racing grilles were modeled as closely as possible on the original by Ottomobile. The label underscores the cult status of the RS4 as a sedan by limiting the model to just 2,500 units.

With the Audi RS4 B5, the first Audi came onto the market under the name RS4 in 1999. This followed the RS2, which was created in 1994 and 1995 in cooperation with Porsche. The RS4 B5 was powered by a 2.7 liter V6 engine with 265 hp that had been revised by Cosworth. The RS4 B7 followed in 2005, to which Ottomobile dedicated its model. In addition to the usual version as a station wagon, the B7 also came to dealerships for the first time as a limousine and convertible. Compared to the normal A4 models, the RS4 B7 differs, among other things, in other speedometer instruments, bucket seats with embossed RS4 lettering and an engine start button on the center console. Even from the outside, you can see the genes of the RS4. The oval exhaust pipes are just as unremarkable as the widened wheel arches and the modified front and rear bumpers. The idea of ??offering the RS4 as an estate car as well as a limousine and convertible was rejected back in 2012 when the RS4 B8 was introduced and has not been reintroduced to this day. The variants of the RS4 as a limousine and convertible remain unique in the B7 model series, at least to this day.

The engine of the Audi RS4 B7 is the same 4.2 liter V8, which Audi used in the R8. Thus, the four-wheel powered RS4 developes 420 hp that are transferred to the rear axle in a slightly dominant ratio via a six-speed manual transmission. Compared to earlier RS models, which were mostly equipped with turbochargers, Audi built the RS4 B7 on a high-revving concept and a naturally aspirated engine with direct fuel injection (FSI). The maximum speed of the engine is 8250 revolutions per minute. When the last RS4 B7 rolled off the assembly line in 2009, 14,368 delivered vehicles were on the credit side of Audi's balance sheet. 7657 vehicles are limousines. 5204 vehicles were delivered as estate wagons and 1507 as convertibles. Depending on the trim level, a new RS4 B7 cost between €72,000 and €85,000. With the Audi RS4 B9, the RS4 model series has been in its fourth generation since 2017. 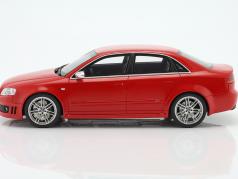 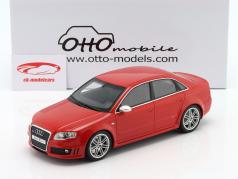