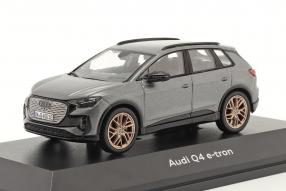 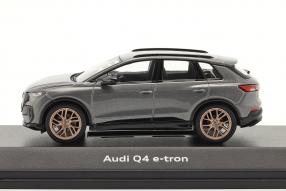 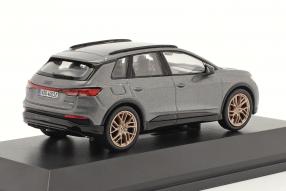 In 2021, the Audi Q4 e-tron saw the light of day. The label Spark dedicated the fully electric SUV from Ingolstadt a model in scale 1:43. The models was produced from high-quality polyurethan resine and is delivered in an Audi factory packaging. The details of the model, which is kept in typhoon grey, were modeled by Spark in the usual high level of detail. And the Q4 e-tron has a number of details to offer that you are already familiar with from other e-tron models. The front of the Ingolstadt-based car is closed, as is typical for the e-tron, so that the Q4 e-tron is the first Audi to come onto the market with closed rings. The reason for this is the position of the sensors there. The rear is equipped with eye-catching LED headlights, which are connected to form a continuous strip of lights. Spark has also included the optionally available 21-inch wheels in the replica of the Q4. All in all, Spark has managed to produce a high-quality model in a popular scale.

The Q4 e-tron is offered with three different motors and two body variants by Audi. In addition to the usual version as SUV, there is also the already known version "Sportback" available with Audi. No major changes can be seen between the two versions up to the B-pillar. Behind the B-pillar, a more rapid drop in the body line can be seen in the Sportback version. The Sportback's spoiler at the end and the resulting split rear window characterize further differences between the variants. The fun fact on the side is that the Sportback actually unexpectedly has a larger trunk volume than the SUV. With a car that has such a forward-looking drive, the idea of ??an equally modern interior concept is obvious. Audi took up this vision. The large MMI display, familiar from Audi, sits enthroned in the middle of the dashboard and is inclined towards the driver. For the interior, the customer can choose between four different colors, which are joined by nine different equipment packages. However, Audi only releases four of the nine packages for the models with sporty equipment (S-Line). In addition to the possible packages, those who choose the S-Line also get many other exclusive details, such as a black roof lining, stainless steel pedals and illuminated aluminum door sill panels.

In the top motor version, the Q4 e-tron has 299 hp. The two battery sizes, which Audi offers, differ from their range of about 180 km. The biggest battery can take up net 77 kWh and brings the Audi in the test up to 534km. Basically, the platform of the Q4 e-tron is based on the platform that already exists in the group, which is also used in the VW ID.4 and the Skoda Enyaq iV. Visually, however, the Audi is completely different from its two platform brothers. In the first year of sales (2021), 4,470 Q4 e-tron vehicles were newly registered in Germany. After all, 1,441 of them had all-wheel drive. 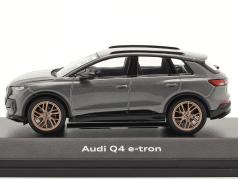 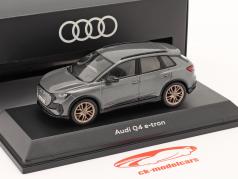