Next weekend, the 24 Hour Race at the Nürburgring is going to take place for the 50th time. ck-modelcars supports the Fly & Help team, which is going to compete with a Dodge Viper for a good cause 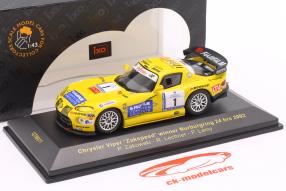 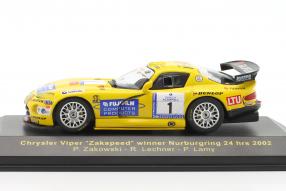 Keyword Viper: A novelty in our shop is another Viper, which wrote history at the 24 Hours in the green hell 20 years ago - the unforgotten Zakspeed-Viper.

The model in scale 1:43 by Ixo leads us back to the time before the GT3-era on the Nürburgring. In the late '90s and early '00s, the Zakspeed Viper was an ubiquitous contender at the 24 Hour race. The Viper was feared by the competition and loved by the fans. An exotic with a spectacular look and a powerful 8.0-liter V10 engine under the long bonnet - no wonder that the Nordschleife scene has never forgotten the car.

And then there are the three over all victories, which were achieved by Peter Zakowski and his team: 1999, 2001 and 2002. The modelcar is dedicated to teh last year. In sumer weather and with a full house, the Zakspeed-Viper had on the 30th edition of the 24 Hour race with two laps ahead of the Alzen-Porsche. Peter Zakowski, Pedro Lamy and Robert Lechner sat in the cockpit. For team boss Zakowski it was the last of his four wins. The Portuguese Lamy won for the second time, but today he is level with Marcel Tiemann and Timo Bernhard as the driver with the most victories - five in total. For Lechner - today team manager in the family team - it was the only success. Remarkable: For the Austrian it was the first start at the Eifelmarathon.

After this last triumph, the Zakspeed-Viper still competed at the 24 Hour race until 2008. However, the big throw didn't succeed. After the tank affair in 2003, the car drove a little weaker in 2004. From 2005, the Viper started with eight cylinders due to a displacement limit of 6.2 liters and drove onto the podium twice more. In 2019, the team gave a brief rendezvous in the VLN with a current GT3 Viper. But when you hear the term Zakspeed Viper, you probably first think of the old, yellow monster - just as it was 20 years ago and now in the showcase thanks to Ixo. 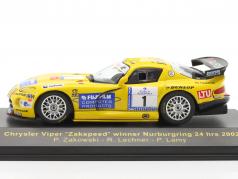 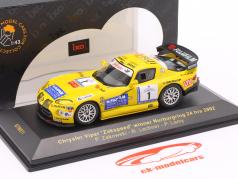