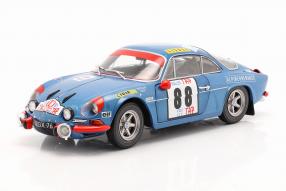 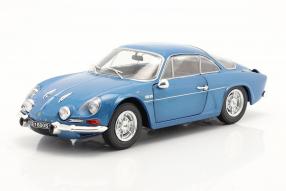 Alpine is the name of the French car manufacturer from the tranquil place Dieppe, which produced a car with the model A100 that even won the rally Monte Carlo. Company founder Jean Rédélé chose the name Alpine based on his victory in the 1954 Alpine Cup. The Alpine A110 is officially considered a sports car and was used in motorsport from 1963. The two models from Solido are the road version of the A100 1600 S from 1969 and the version with which Jean-Pierre Nicolas and Jean Todt started in the Rally Portugal in 1971. The scale 1:18 models have steerable front wheels and openable doors.

Company founder Jean Rédélé took over the Renault workshop of his parents at the age of only 24 after the Second World War, making him the youngest Renault dealer in France. The motorsport enthusiast Rédélé, who drove in races by himself, had the vision of constructing his own sports car. A fast, agile vehicle with a rear engine should scare the competition in racing. As early as 1955, before the company was actually founded, the first prototypes were made by hand. Series production began in 1956. The 1600 S version of the Alpine 110 had a 4-cylinder in-line engine in the rear that developed 138 hp. With an empty weight of only 750kg, a top speed of 215 kph could be achieved.

After Renault took over the majority of the shares in Alpine in 1973 and Jean Rédélé also sold his remaining shares in Renault 5 years later, Alpine was owned by them until 2012. After a short excursion during which Renault sold 50% of the company to the British sports car manufacturer Caterham between 2012-2014, these shares were bought back in 2014. Renault has since made maintaining the Alpine brand its goal. Proof of this is a new edition of the A110, which was presented at the 2017 Geneva Motor Show and is still being developed today.

[03.10.2021] The last Porsche 911 in the body shape of the original type, which after 26 years marked a new chapter in Porsche's long success story

[23.09.2021] A high quality set for collectors. Product-launch of the limited Porsche RSR in the striking Coca-Cola design by Spark 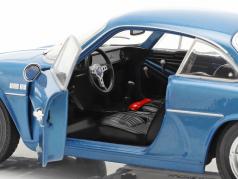 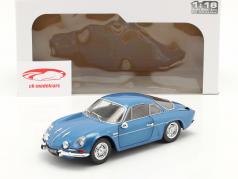 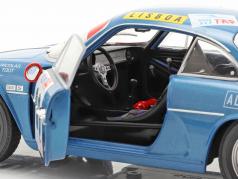 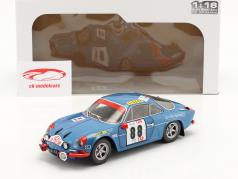