23.09.2021A high quality set for collectors. Product-launch of the limited Porsche RSR in the striking Coca-Cola design by Spark

Two Porsche RSR in Coca-Cola design from resin in scale 1:43 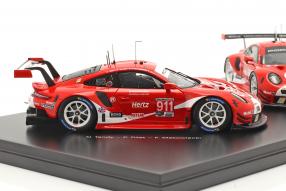 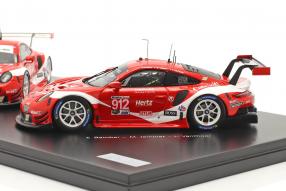 Just a few month before the Coca Cola truck is rolling through the TV commercials during the Christmas time, there are two vehicles from the manufacturer Spark that are at least as polarizing in scale 1:43 with the imprint of the well-known beverage brand. It is about the set of the two Porsche 911 RSR in design of Coca-Cola, which is already sold out from the manufacturer's side. This set includes the Porsche with starting number 911 that was driven by Patrick Pilet, Nick Tandy and Frederic Makowiecki, as well as the second vehicle with starting number 912, piloted by Earl Bamber, Mathieu Jaminet and Laurens Vanthoor. The set with the two models produced from the high quality resin is limited to a number of just 300 pieces and gets delivered in a Porsche Dealer box. The models follow the similarly limited sister model in scale 1:18, which is also available in our shop under the item number WAP0219300MCCL.

13 victories, 34 podiums, a title in the FIA World Endurance Championship and the IMSA WeatherTech SportsCar Series as well as triumphs at the big classic events in Le Mans, Sebring and on the Road Atlanta - this is the impressive balance sheet of the Porsche 911 RSR of the model year 2017 after its 50th and last factory use. The fact that Porsche used the design of the coffeinated soft drink in the IMSA finals also has something to do with the headquarters of Coca Cola. The track Road Atlanta, which is also called "Petit Le Mans", is just about 75 kilometers away from the headquarters of the soft drink giant. As early as 1986, Porsche had started the Sebring 12h race with the Porsche 962 in Coca-Cola design. In addition to Bob Akin and Jo Gartner, the 962 was also piloted by the German Hans-Joachim Stuck.

The 375 kW / 510 hp strong race car after GTE-regulatins or the regulations GTLM in the USA, goes down in the history of Porsche Motorsport as one of the most successful vehicles. Porsche presented this 911 RSR, which is based on the high performance street race car 911 GT3 RS, on the Los Angeles Auto Show in autumn 2016. The sports car manufacturer presented an uncompromising race car and moved away from the traditional rear engine concept. “By positioning the drive plant in front of the rear axle, we have created new space at the rear for the important diffuser. It also went hand in hand with an improvement in weight distribution. These factors not only made the car faster, but also ensured that tires were used optimally,” explained Pascal Zurlinden, overall project manager for works motorsport. “The new concept was brave, but it absolutely paid off,” agreed Fritz Enzinger, Head of Porsche Motorsport. In the nine races of the FIA WEC in the 2017 debut season, the works drivers with the starting numbers 911 and 912 achieved a total of nine podium places: In the end, only eight points were missing to win the title. 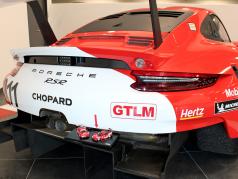 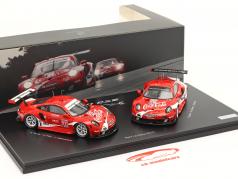