Minichamps extends its specialized trade program with modelcars in scale 1:43 from diecast and with removable soft top 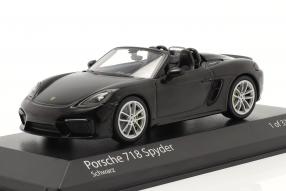 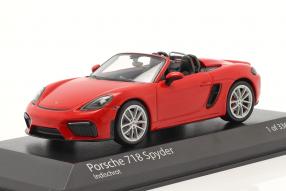 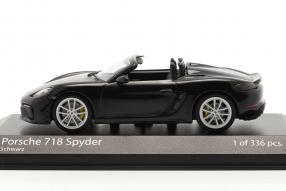 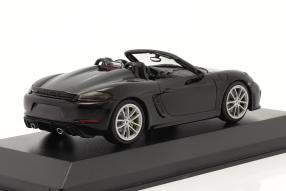 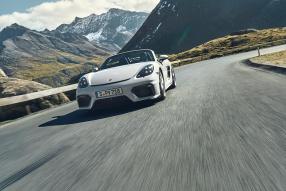 In the video, embedded above, the driver of the new Porsche 718 Boxster Spyder of the model series 982 really lets the wind blow around his nose and Minichamps tries to transfer this feeling into the showcases of the collectors. This with extraordinary, but unsurprising success: The team from Aachen always succeeds with modelcars to the topic Porsche! Thus, the Spyder is no exception and comes with harmonious proportions, lines that match the models absolut and thus a grace that is flawlessly transferred into the modelcars; this, by the way, for the specialized trade and in three versions. In black under item number 410067701, in the popular miami blue (410067700) and the classic guards red with the designation 410067702 in scale 1:43 and each limited to just 336 pieces.

The quality of the workmanship of the models leaves nothing to be desired and impresses not only with the exterior, but also with the interior, which is kept puristic in the original. The dashboard, seat construction and interior trim, is meticulously reproduced. As usual in this format, the engine remains hidden: the 4.0 liter six-cylinder has an output of 309 kW / 420 hp; managed with a six-speed manual gearbox and thus in keeping with the puristic spirit of the Spyder. The replicas of the 20-inch alloy wheels, which are black on the blue model and silver on the two other 220-gram miniatures, are also eye-catching. Porsche indicates the top speed at 301 kilometers per hour. The sports car accelerates in 4.4 seconds to 100 kph.

The Spyder-lettering can be found, where the manufacturer from Stuttgart placed it at the role model. The outstanding optical feature of the 982 is of course the new rear cover, of which the shaping is perfectly done by Minichamps. Surprising for us, the models are delivered with a removable top that can be attached to the miniatures; removing this is faster than having the electrically operated folding top of the prototypes sunk under the cover. With a purchase base price of 94,571 euros inkl. VAT, the pleasure can start on the street; in the model size 1:43, the parking in the showcase is way cheaper. For those, who are interested in the Boxster, should also take a look at the special model to its 25th anniversary; a click to the link also leads to these miniatures in format 1:43 by Minichamps, who else?