Four colors, a special specification: With the modelcars to this series, BBRmodels takes advantage of a special series, which celebrates the class victory 2017 in Le Mans 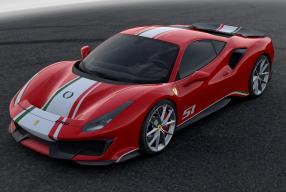 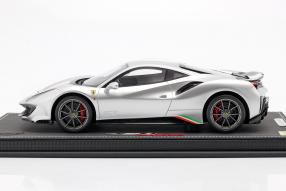 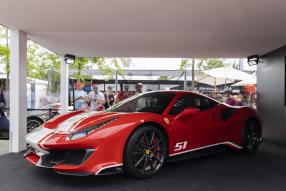 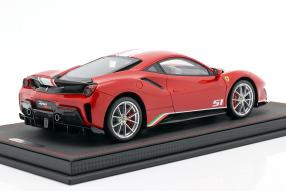 On the occasion of the 24 Hours of Le Mans 2018, the Italian sports car manufacturer Ferrari brough a unique Piloti Ferrari-specification for the Ferrari 488 Pista on the market. This special creation had been developed to recognize the success of customer teams who drive Ferraris. It made its debut on the eve of the legendary French endurance race at the Circuit de la Sarthe. Inspired by AF Corse's racing car with the starting number 51, with which Alessandro Pier Guidi and James Calado won the drivers' and manufacturers' title of the FIA World Endurance Championship (WEC), this special finish for the new Ferrari 488 Pista is available excusively to customers involved in the company's motorsport programs. BBRmodels builds the miniatures for this: Here two of these gems in scale 1:18.

The modelcars with the item number P18160A, which were limited to 232 pieces in the Rosso Corsa paintwork, are currently still in the shop. The miniatures with the number P18160C come in Nero Daytona black and limited to 60 pieces. In the blue shade of Blu Tour de France, the models with the P18160B were limited to 20 units; in Argento Nürburgring silver on 70 pieces (P18160D). In addition, modelcars as well as role models were decorated with a new paintwork with stripes in the colors of the Italian flag, which are reminiscent of the racing version of the 488 GTE and are decorated with a laurel. This celebrates the class win in the WEC; supplemented by the logo of the championship and the word Pro. The Italian flag can be found on the flanks of the car, which bear the personal starting number that each customer can add individually.

These details as well as the sill trims, front spoiler and rear diffusor were worked out as thoroughly as ever by BBRmodels. The finish of the surfaces of the modelcars is inimitable; the lines are a perfect replica of their role models. The interior of these vehicles is lined with black Alcantara; the seats are upholstered with a special perforation made of the same material that contains the Italian flag in the central band of the backrest. The national colors are also clearly visible on the edge of the gearshift paddles and on the floor mats, which, like the carpet itself, are made of a special technical fabric. The number on the exterior paint is also on the base of the steering wheel, while all carbon fiber trim pieces are matte. The personalization of the interior is rounded off by an exclusive nameplate.

The sill panels are produced from carbon fiber, which unfortunately can not be seen at the modelcars, which are produced from the high quality polyurethan cast resin, because doors and hoods remain closed. That also applies to the engine hood: Under this, a 3.9 liter V8 with turbo chargers slumbers at the role model, which had been choosen for the best engine in the world for the third time in a row at the International Engine of the Year Awards 2018. It is the strongest version of this drive plant with 530 kW / 720 hp, with which the Ferrari 488 Pista Piloti accelerates in 2.85 seconds to 100 and should be faster than 340 kilometers per hour. If you ask the editorial staff: Secure one of these fascinating vehicles very quickly: Even if its just in scale 1:18. It is good value!

Here: Click to the modelcars of the Ferrari 488 Pista Piloti 2018