With new modelcars in scale 1:43 and 1:18, LookSmart and BBRmodels draw attention to current Italians: Highlights from Maranello for the showcase 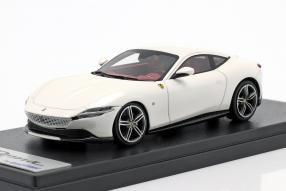 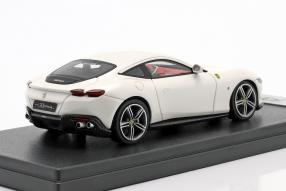 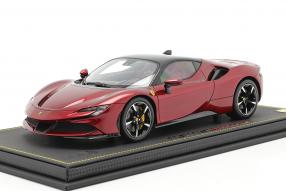 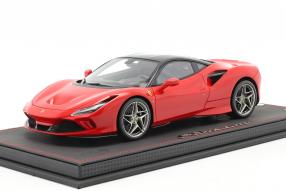 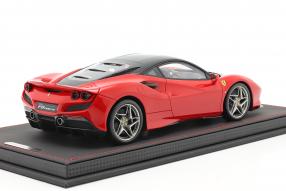 Three new modelcars should stay in focus of this article. All three are dedicated to role models from Ferrari and are delivered to the collector by the Italian brands BBRmodels and LookSmart. Let's start with a novelty from this week: With the Ferrari Roma of the model year 2020 in scale 1:43, BBR delivered three miniatures of the super sports car, which was presented just in November last year. The Roma is a two-door coupe with front mid-engeine, which transfers the design language of Ferrari into the next decate. Classic and future together connected, no vehicle from Maranello can do that at the moment. By the way: Maranello is currently just the headquaters of the head office; the company, founded in 1947, has its headquarter in Amsterdam, Netherlands. Is Ferrari because of this not really a Dutch car brand?

We want to put this theoretical mind game aside and devote ourselves again to the modelcars. The Ferrari Roma appeared in the colors titanium grey, corsa red and the here presented italian white under the item number LS508D. The mold engineers from LookSmart met the appearance of the 3.9 liter big V8 equipped Roma perfectly; the new designed radiator grille as well as new taillights are extraordinarily transferred to the cast resine models by the label. The engine coming from the Portofino, which delivers 456 kW / 620 hp in the Roma, works under the bonnet of the prototype. In 3.4 seconds it is at 100; Propulsion ends at 320 kilometers per hour. The eight-speed dual clutch transmission is also used in the Ferrari SF90 Stradale, our next model.

The SF90 Stradale carries the name of the Formula 1-Ferrari SF90 around the world and is the first hybrid, which the Italians built for the street. Its system performance is 735 kW / 1,000 hp according to Ferrari. The further development of the engine from the Ferrari 488 contributes 574 kW / 780 hp to this. The top speed is given with 340 kilometers per hour; in 2.5 seconds he accelerates to 100. The modelcars of the super sports car, presented in May, 2019, are delivered by BBRmodels in fiorano red with a limitation of just 200 units under the item number P18180C. The overwhelmingly good surface quality of the scale 1:18 miniatures, also made of high-quality polyurethane resine, is continued in the detailed interior. A feature that the SF90 Stradale also shares with the Ferrari F8 Tributo, our last model for today.

Last but not least: Modelcars to the Ferrari F8 Tributo

In March, 2019, Ferrari launched the successor of the 488 GTB with the F8 Tributo. Its eight-cylinder biturbo with 3.9 liter displacement developes 529 kW / 720 hp and accelerates the sports car in 2.9 seconds to 100; the peak is given with 340. The customer finds a new desigend dashboard and new ventilation nozzles, controls, door panels, steering wheel and a tunnel in the interior. The rear reminds of the limited Ferrari J50, which was only sold on the occasion of Ferrari Japan's 50th birthday in Japan. As it, the F8 Tributo has two round taillights each left and right - in terms of design, they are actually the forerunner of those from the Roma - as well as higher located exhaust tail pipes. The models of the Tributo in corsa red and limited to just 48 units under the item number P18171ARCM in format 1:18 should not only make the hearts of Ferrari fans beat faster.

Here: Click to the new modelcars to the topic Ferrari