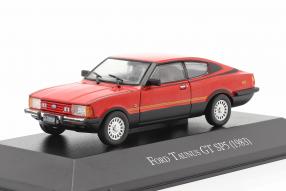 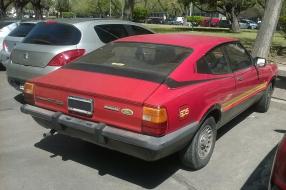 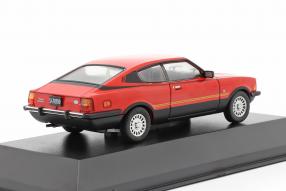 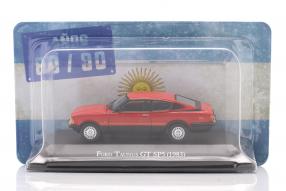 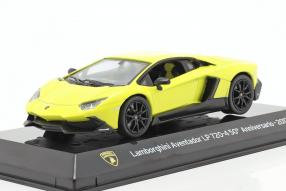 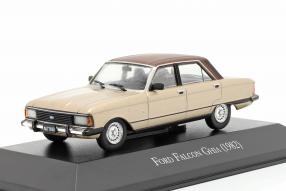 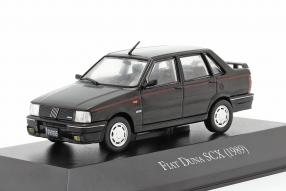 Since 1985, Altaya belongs to the best suppliers of the modelcar-industry. The manufacturer of high quality toys from Barelona always suprises with miniatures, to which even our editorial staff can not immediately classify the role models. That's also the case with some modelcars in scale 1:43, which are available in the webshop since Monday and which also remind of role models that have long since disappeared from the show rooms of the car manufacturers or were obtained just for the non-European automotive market. For example, we have never seen the Ford Taunus GT SP5 from 1983 in Germany in this version. No wonder, this coupe was built in Argentinia with the help of old European forms. Altaya replicates here the sport version, which rounded off the program upwards until it was replaced by the Sierra in 1983. And what about the finish?

In terms of design, finish, processing and quality, the modelcars form Altaya may do not correspond to the sophisticated attention to detail from Minichamps, but that is actually whining at a high level. Because, except of the somewhat coarse-grained windshield wipers, the Ford Taunus GT SP5 makes a pretty good figure. The appearance matches perfectly with that of the role model; the radiator grille with integrated spotlights, the bumper with the black rubber strip and the plastic corners as well as the printing of the sport version would not have been done better by Minichamps. The replica of the light alloy wheels is mega; there is no detail missing in the interior. The collector only has to cut back on the packaging, because the modelcars from diecast have the customary plastic base, but not the show case cover.

They are just protected by a blister cover. That also applies to the sold in Argentinia Ford Falcon Ghia 1982, which Altaya released in 1:43. There the prototype competed with the IKA Renault Torino Lutteral Comahue SST 1978, a license built by Industrias Kaiser Argentina, IKA for short. Also Fiat is represented in the range of Altaya, like the SCX 1989 that has not been available in Germany, a notchback version of the very successful Fiat Uno. Altaya also knowledgeably implemented the beads of the Suna, which differentiated it from the Uno. The Fiat 125 Mirafiori 1981 was developed by Sevel Argentina S.A. built, a joint venture between Fiat and Peugeot, based in El Palomar in the province of Buenos Aires. So who intends to extend his collection to Fiat, Renault, Ford and Chevrolet, Lamborghini and Peugeot by rare vehicles is right here!