The US-American modelcar manufacturer delivers diecast-modelcars in scale 1:43 to the guest two follow the popular television series from season 5 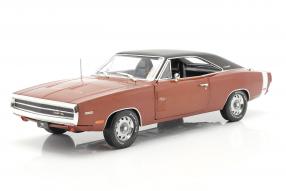 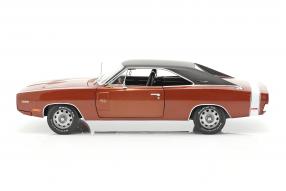 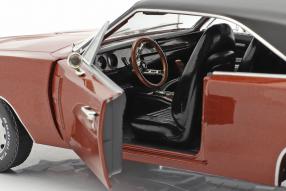 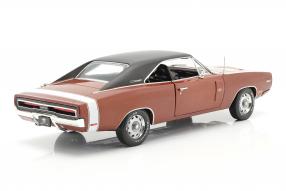 On January 6th, 2016 a rocked Dodge Charger R/T from 1970 was reborn: The vehicle landed before in the workshop of moderator Mark Worman, the head of the TV-series "Graveyard Carz". In this, from 2012 running series, American muscle cars, in particular, are brought back into a respectable condition; there are similar formats on VOX and RTL II in Germany. In the 5th season as well as in its 11th and 12th episodes it was the line on the Dodge Charger R/T 1970, to which Greenlight delivered matching modelcars this week. You read correctly, dear friends: The car, which Mark Worman and his team have transformed into a desirable beauty, can be purchased from diecast and in scale 1:18 as modelcars for your home showcase. This is what VOX & Co do not offer so far.

The Dodge Charger was built as a mid-range coupe from 1966 to 1978. The role model of the modelcars available under item number 19077 is the second generation, which spanned the model years 1968 to 1970. It made its debut in a body that was new compared to the original vehicle; the 1970 version received the chrome frame running around the radiator grille, making it stand out from the other variants. The central trim strip in the grille, which comes into play again this year, is clearly recognizable. The team from “Graveyard Carz” decided to rebuild the Dodge Charger R/T for one of the so-called high impact colors, the Hemi orange, which, like the tones available in parallel, corresponds to the spirit of the 1970s. The R/T was the top model of the series at that time and could be motorized with up to 390 SAE-PS.

The modelcars for the star of episodes 11 and 12 entitled "HEMI FK5 Alive" correspond exactly to the lines and appearance of the prototype, as is usual with Greenlight. In the interior, the mold makers also have the seats with the integrated headrests - the so-called high back bucket seats - taken into account, fittings and interior door panels reduced according to the prototype. 49,768 1970-Chargers found buyers, of which 10,337 were found by R/T. "Graveyard Carz" has developed into a real long runner: The 10th season of the series started on December 6th, 2019 at the Motortrend broadcaster. We have embedded episode 11 with the Dodge Charger R/T 1970 above, episode 12 can be reached via the link below, enjoy watching and have a nice weekend!

Here: Click to the modelcars of the Dodge Charger R/T 1970