A unique vehicle for a special use: The Citroen DS PLR Break 1972 finally appears now from diecast, to conquer the showcases 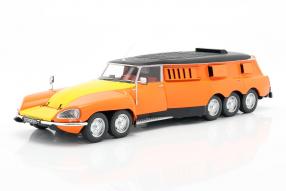 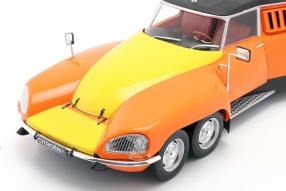 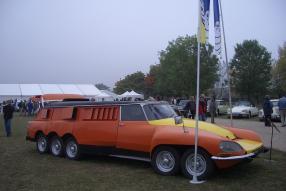 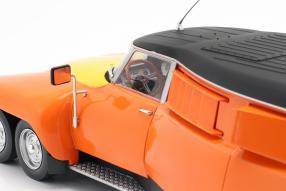 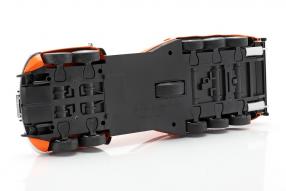 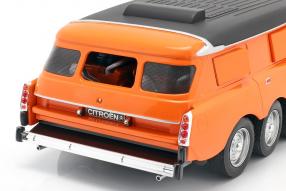 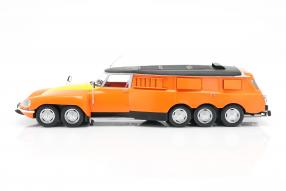 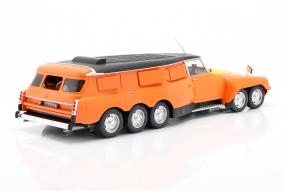 CMR has found a real gap in the market with the modelcars of the Citroen DS PLR Break Michelin. The miniatures of the also called "Mille Pattes" or "centipede" special vehicle replicate the special model on the basis of the Citroen DS, which arose after the design of designer Flaminio Bertoni in 1972, the creator of the 2CV. The abbreviation PLR of the Citroen DS PLR Break Michelin means "Poids Lourd Rapide", so faster truck. The vehicle was used to test the driving properties of truck tires at high speed. The tires were brought onto the road with a crane construction in the rear, approximately in the middle of the underbody. The maximum speed of the test car is 180 kilometers per hour, implemented with two V8s from the Chevrolet Corvette - one for the crane and test tires and one for the drive in parallel.

From each 5.7 liters displacement, two times 213 kW / 290 hp were available. The coloring is typical for its time: yellow and orange, as striking as the vehicle itself. Back then, Michelin was still shareholder of Citroen: The tire manufacturer tested with the Mille Pattes on the area in the French Ladoux. And this under extreme conditions: The special vehicle with a width of 2.45 meters and a length of 7.20 meters was equipped with lead weights of 9.5 tons and had five axles. A lot of air was needed for cooling, which explains the large air inlets on the sides. Therefore, the tailgate is also barred or the windows are completely omitted, which the modelcars from CMR perfectly implement into the scale 1:18. The miniatures in this size measure a whopping 40 centimeters.

Detailing taken to the extreme

CMR has taken the detailing to the extreme with the here presented model. From the chrome bumpers and taillights, taken from the series, over the wooden steering wheel in the two-seater cab, over the structure of the roof as well as the correctly replicated vantilation openings, there is no detail that does not match the appearance of the role model. The attachment parts as the wing mirrors and the steel disc wheels know how to convince visually and in terms of processing. A bomb for the showcase, which fits very well to the DS Tissier car transporter that has similar genes as the Mille Pattes. The role model, by the way, can still be visited today. It has found its last parking space not far from the test track in the Michelin Museum in Clermont-Ferrand and is in top form.

Here: Click to the modelcars of the Citroen DS PLR Break Michelin