CultScaleModels released modelcars in scale 1:18 for the weekend, which remind on thoroughbred due to their racy design and their role models are very rare 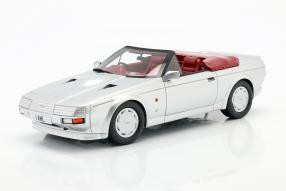 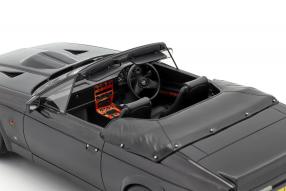 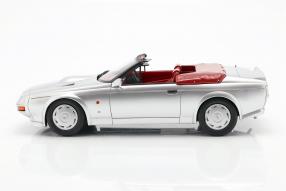 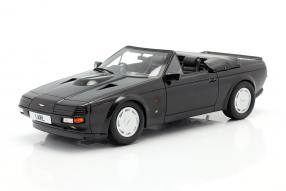 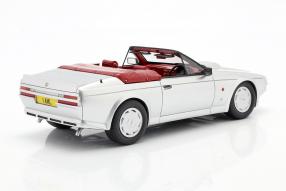 It was the second collaboration between the car manufacturer Aston Martin from England and the Italian design smithy Zagato, which was founded in 1919: The Aston Martin DB4 GT Zagato from 1960 was to be followed by the Aston Martin V8 Zagato in 1986. The mold makers from CultScaleModels took the spyder version Volante from 1987 as the role model for their created miniatrues of the high quality polyurethan cast resin, which are now available in silver painting under the item number CML034-2 as well as in black paint under CML034-1 in scale 1:18. With these models, we want to take a look at a fascinatingly consistently styled vehicle, which celebrated its premiere at the Geneva Motor Show and was one of the most sensational convertibles there. Their appearance is reminiscent of noble racehorses and they are also traded expensive like these.

The website Classic Trader, currently offers a blue metallic painted Volante for 331,658 euros and refers to the low mileage of 6,800 miles. Luckily, the miniatures, which are presented here by the Dutch from CultScaleModels, are way cheaper for the collector. They replicate the cabriolet from Zagato, based on the Aston Martin V8 Vantage, which received an independent body as the coupe version - hardly recognizable as Aston Martin anymore, if the viewer refrains from the abstract lines of the grille design. The open version has moved even further away from the series design, because it even dispenses with visible headlights. These disappear under a lid, which CultScaleModels transferred exemplary on the miniatures called Aston Martin V8 Zagato Spyder.

But here our editorial team becomes unsure: the open version actually got the name Volante and not Spyder; just like Aston Martin’s open cars. The 25 or 37 vehicles of the small series built, depending on the source, did not have the hump on the bonnet, which was due to the installation of the V8 with quadruple carburetor in the coupe presented in 1986. The open version got the - but also weaker - variant with injection system and the hump on the hood disappeared. But CultScaleModels did not make a mistake there: the exhibit in Geneva still had this hump. Let's stay with the engine for a moment: In the role model of our modelcars, the V8 developed 224 kW / 305 hp and developed a maximum torque of 447 Newton meters (Nm). The open-top car with rear-wheel-drive accelerated to 100 km/h in six seconds.

Its top speed is given with 257 kilometers per hour; so significantly less than the coupe with 322 kW / 438 hp as well as 534 Nm. As usual with the miniatures from CultScaleModels, they perfectly match the line management of the V8 Zagato Volanto. Doors and hoods remain closed as usual in this segment. The look into the interior, however, with the many lovingly implemented details, compensate it from the view of the editorial staff in any case. The engravings of the fully clad front as well as the partially covered rear lights are superbly crafted: Not too fat, not too thin! Front bumper and rear spoiler, the replica of the light alloy wheels - everything fits! Our tip: Get it before the models become as scarce and expensive as their role models.

Here: Click to the modelcars of the Aston Martin V8 Volante 1987