With the 90-year-old Briton, the oldest winner of a Grand Prix left us. We remember a gentleman of motorsport about the modelcars 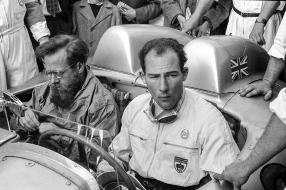 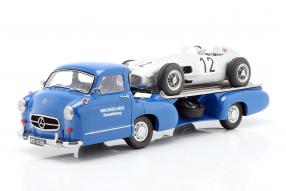 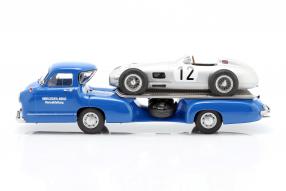 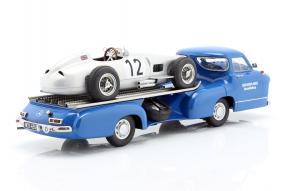 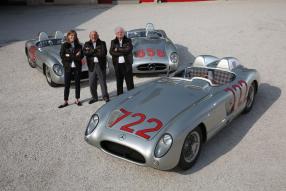 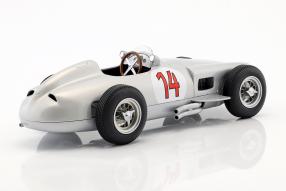 On Easter Sunday, the British racing driver Sir Stirling Moss died, 1955 the star of the racing department of Mercedes-Benz. He celebrated outstanding victories with the Mercedes-Benz 300 SLR racing car of the type W 196 S and became Vice World Champion of Formula 1 with the W 196 R. His successes are highlights in the 125 years, in which the brand Mercedes-Benz operates in motorsport. On September 17th, 2019, the motorsport athelete, who was raised  to the nobility in 2000, celebrated his 90th birthday. Now countless fans all around the world mourn the ambassador of the car manufacturer from Stuttgart.  And this brings us to an aspect that is also covered by the modelcars: they are always mementos of the heroes who sat behind their steering wheels; especially the models based on role models that competed in races decades ago.

And thus the memory of Sir Stirling Moss will not fade. There is, for example, the set from manufacturer iScale, which probably replicates the most beautiful comibnation of the Mbercedes-Benz racing department in scale 1:18: the racing transporter with the nickname "The Blue Wonder" and the W 196 with the starting number 12 driven by Sir Stirling Moss, with which he won the British Formula 1 Grand Prix 1955. The set is available with the item numbers 1180 0000 0006 or 1180 0000 0009 and shows the modelcars in a first-class finish, excellently processed and with a look that exactly matches the prototypes. Moss' racing car is also available under number 118000000011, with which he achieved second place in the Belgium GP of the same year. The winning car from Great Britain is also available individually.

But now we come back to Sir Stirling Moss. The base for the career of the Briton was already laid in primary school: Inspired by the motorsport successes of his mother Aileen and his father Alfred, the boy dreamed of becoming a professional racing driver. Already with the age of 15, he received a special permit for the driver's license. In 1948, Stirling Moss bought a Cooper-500-racin-car. With it, he started in the Formula 3 in 15 races, of which he won twelve. That was actually the begin of an international career. In 1949, the young racing driver became member of the British H.W.M.- factory team in the Formula 2 and won the English Formula 2-Championship title in 1949 and 1950. In addition to this, Moss also won the Tourist Trophy with a private Jaguar XK 120 in 1950 and also beat the manufacturer's factory racing car. In the following year, he led the Jaguar-team.

As one of the first professional drivers of this era, Moss hired a manager who took care of commitments and fees. How correct the decision was was shown in 1953 when manager Ken Gregory approached Mercedes-Benz racing director Alfred Neubauer: If the Stuttgart brand wanted to get Mercedes-Benz back into Grand Prix racing with Moss? In the season 1954, Moss initially started on his own Maserati 250 F in Formula 1 as a private team "Equipe Moss" (later "Stirling Moss Ltd."). His race duel with Silver Arrow chief pilot Juan Manuel Fangio made a strong impression at the Italian Grand Prix in Monza: Moss was in the lead until twelve laps before the end, when he was hopelessly thrown back by a technical defect. Winner Fangio respectfully described Moss as the real winner of the race.

Neubauer was convinced of the great talent of the British racing driver in 1954. He invited him for test drives an commited him for the season 1955 as works-driver of the Mercedes-Benz racing department. Moss should complete a total of 17 races with the Formula 1 racing car W 196 R as well as the new 300 SLR racing car (W 196 S): He finished the season as Vice World Champion of the drivers classification. In 1955, Stirling Moss was most successful in sports car races with the Mercedes-Benz 300 SLR, specially developed for the season: The vehicle celebrated its premiere at the Mille Miglia. The British racing driver also won the Tourist Trophy in Dundrod in Northern Ireland and the Targa Florio in Sicily. In addition to Fangio's title win in Formula 1, Moss also secured the Stuttgart brand the victory in the 1955 World Sports Car Championship.

Stirling Moss continued his career after Mercedes-Benz stepped out of motorsport on racing cars from Maserati, Vanwall, Cooper, Porsche, Aston Martin, Ferrari, Lotus and B.R.M. Moss achieved numerous victories and excellent placements in Formula 1: Vice World Champion in the years 1956 to 1958, 3rd place in the Driver World Championship in the years 1959 to 1961 and in sports car races. After a serious accident at the "100 Miles of Goodwood" on April 30, 1962, Moss ended his active career at the age of 33. Sir Stirling Moss remained closely connected to motorsport as an author and racing expert. According to his wife Susie, the oldest living Grand Prix winner died in his house in London: “He looked wonderful! He just fell asleep in the end. He closed his eyes and that's it!"

Click here to the modelcars with the topic Sir Stirling Moss