Minichamps as well as Ixo have presented many novelties to the brand with the white-blue logo in 1:18 the last couple of days 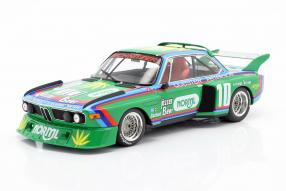 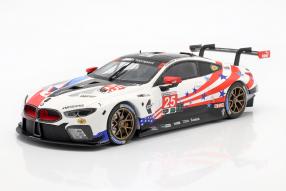 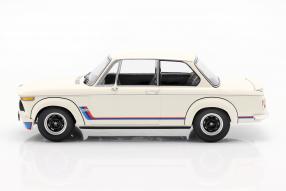 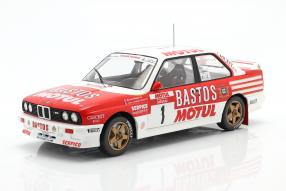 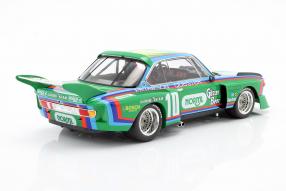 The modelcar manufacturers Ixo and Minichamps make use of the present and past in the program of BMW: A perfect opportunity for fans to extend their collection to this topic. The role models of the here presented modelcars of course come from the motorsport, but also from the street. Let's start our little consideration with the novelties from Minichamps that appeared yesterday. Especially the model series E30 seems to be very interesting for the manufacturers at the moment, but the little 3 Series, which had been built from 1982 to 1994, has always been interesting. Claus Luthe was responsible for the overall design; Boyke Boyer designed the no frills, sporty appearance of the BMW 3 Series of the E30 generation, which we also find at the modelars, of which the role models had been used in motorsport.

Minichamps launched the E30 this week, with which Emanuelle Pirro won the legendary Macau Guia Race in 1992. The BMW M3, painted white in the basic tone, had a subtle sponsor painting in the colors of Mobil Oil and was published by Minichamps in a scale of 1:18 in an edition of 300 pieces. Two new releases from the team from Aachen are reminiscent of the 6 hours of Watkins Glen: On the one hand, we go a few decades back to the BMW 3.0 CSL with No. 10, which achieved the fifth place in the endurance race in New York in 1976 with Dieter Quester and Ronnie Peterson. On the other hand, we are very close to us in the present with the modelcars of the BMW M8 GTE by Bill Auberlen, Connor De Phillippi and Alexander Sims, because the 8 Series used by BMW Team RLL started in Watkins Glen in 2018.

From this newer model, Minichamps brings 204 pieces to the trade; from the appealing green painted racing car of the BMW Team Schnitzer it is a number of 300 pieces. There are 42 years between the role models of these modelcars - it could be just a few centimeters in the showcases of the collectors. Nearly half a century motorsport! Three more years ago takes us the white version of the BMW 2002 turbo, where Minichamps puts the BMW 2002 tiK No. 62, the class winner of the Guards International European 6 Hours Saloon Car Race Brands Hatch 1969 in addition next to the civilian variant shown here, in the showcases of the fans. An ancestor of the BMW M2 Competition 2019, so to speak, to which Minichamps has delivered modelcars in several colors and to which we currently offer the color variants blue, orange and silver.

Finally, we want to go back to the BMW M3 of the E30 series. Not only the Aachener from Minichamps have decided for this vehicle or its offhoots in motorsport, but also Ixo. With the BMW M3 of the Team Bastos Motul BMW, the fan of the model series has the opportunity to extend its collection with the competitors of the Rallye Tour de Corse 1988. Bernard Béguin, Jean-Jackques Lenne finished with the starting number 1 the 7th position; Francois Chatriot, Michael Perin made it with the starting number 9 even to the fourth place. For both red-decorated racing cars, Ixo is presenting miniatures that can keep up with those of Minichamps in appearance and quality and complement the field of M3 in motorsport in their own way. Friends of modelcars about the brand with the white-blue logo: As mentioned at the beginning, they are currently being spoiled! We wish you happy Easter! Stay healthy!