Almost Real brings the fascinating and executed in great detail modelcars of the British luxury limousine in scale 1:18 in the trade 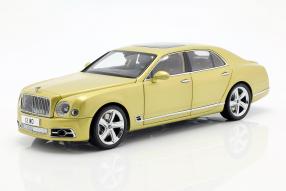 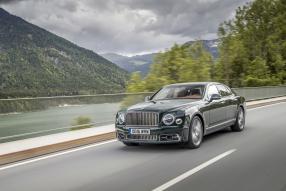 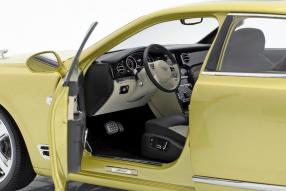 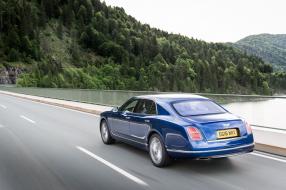 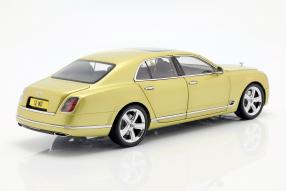 The still relatively young label Almost Real presents us the well made miniature of the Bentley Mulsann Speed of the model year 2017 in the color monaco yellow and with the item number ALM830101. The year before, the luxury limousine originally presented in 2009 had received a facelift, the details of which are reflected in this model and its other color variants: such as the larger radiator grille. About two years earlier, the speed version came on the market, where its twin-turbo V8 with just under 6.75 liters of displacement compared to the base instead of 377 kw / 512 hp now 395 kW / 537 hp and 1,100 Newton meters (Nm) maximum torque to provide the rear wheel drive; Of course, switched from an eight-speed automatic. At 305 kilometers per hour, the maximum speed is achieved, in 4.9 seconds, the sprint to 100 is done.

Not bad for a car that weighs about 2.6 tons, right? And to this exactly in the length of exactly 5.575 meters measuring top-class limousine, Almost Real delivers 31 centimeter-long modelcars, which are made of diecast. According to the standards in this segment, of course, with doors and hoods that can be opened all the way around: four doors allow a complete overview of the lavishly designed interior and fit flawlessly and without a large gap into their die-cast zinc environment. The build quality can be praised but also the trunk lid and the hood. Both functional parts swing far upwards. However, there is not much to see from the propulsion kit of the prototype: Here, a black cover dominates, the center of which is cut out for the intake manifolds. The small grids on the right and left are of good quality.

The underbody is modeled as well as modelcars in this class usually well. The exact matching glass sunroof completes the good impression that the exterior arouses in the beholder. In the interior of the model, which is available at 330.463 euros, the high level of build quality continues. Especially the high-gloss decorative parts inspire the eye; Instrument carrier and dashboard, switch and seat are also eye-catcher. Almost Real was clever enough to give the here presented yellow Mulsanne Speed other rims on the way to the collector, compared to the Light Emerald / Midnight Emerald. Yes, these modelcars are slightly higher in price, but their finish and details justify it as well as the Land Rover Camel Trophy from the same source that also announces miniatures to the Mulsanne Grand limousine.

Here: Click to the modelcars of the Bentley Mulsanne Speed 2017