For the third race of the season 2019, Sebastian Vettel promised that his team has learned and wants to get better. We look at the current news in 1:43 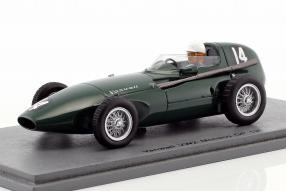 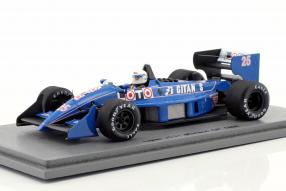 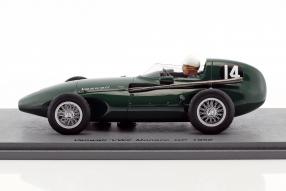 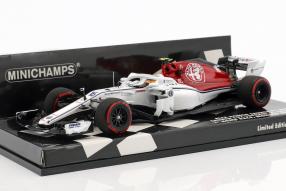 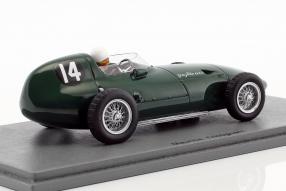 With the run on the Shanghai International Circuit, the third race of the season in the F1 starts this weekend. Valtteri Bottas goes with his 44 Points as the leader of the driver evaluation into the race, closely followed by teammate Lewis Hamilton. On places four and five is Ferrari with Charles LeClerc and Sebastian Vettel; on the third position is Max Verstappen with the Red Bull Honda. Keyword LeClerc: A new modelcar to his race car from season 2018 arrived now in scale 1:43, which replicates the Alfa Romeo Sauber C37 in the decoration of his first home run in Monaco. Minichamps has produced the monoposto with the item number 417180616 to a limited unit of 680 pieces and out of highqulity resin. But this is not the only novelty for the topic Formula 1: Especially Spark was aktive again.

Anyone who knows the team around company founder Hugo Ripert knows that it does not want to leave any gaps in the collections open. Spark finds almost every role model and often goes back decades. We are convinced that the collectors of the 1950s to the 1980s would have loved to have such filigree miniatures, but at that time model making was far from over. The team Frank Williams Racing Cars provides the template for the best example: Under the item number S4038 Spark reduced the Williams FW04, with the Jacques Laffite the second place out of the Grand Prix of Germany in 1975. The World Cup, as the Formula 1 was still called at that time, included 14 races at the time. As world champion Niki Lauda finished the 26th season; for the winner of the constructors' rating Ferrari at the start.

Thus Spark's modelcars are always a glimpse into the history of motorsport in general and Formula1 in particular. This also applies to the models of the Ligier Loto by René Arnoux, who competed with the JS31 of the Equipe Ligier in 1988 in Monaco and has dedicated the Spark with the miniature S3967 a beautiful replica in 1:43. How clever the model makers are in locating each participant, Spark proves with the miniatures of the Formula 1 racing cars of the team Vandervell Products Ltd., of which we have hardly heard anything from fans today. The existence of this team is due to the desire of the British industrialist Tony Vanderwell to oppose the successful cars of Alfa Romeo and Ferrari and Mercedes-Benz in the early 1950s, something that comes from England.

Vanwall was one of the top teams of his time

Vanderwell began with his team from the UK, however, with chassis, which he bought from Ferrari and had modified; In 1954, however, came the first self-construction. Designers John Cooper and Frank Costin, the pioneers of today's still popular monocoque design, were involved in their development. The own engines were further developed for 1956 by none other than Colin Chapman. The Englishman Stirling Moss won in 1957 on Vanwall the first victory of a British on English soil since 1923. With nine wins until 1958, the team was one of the top teams; the following descent led to the dissolution in 1960. The Vanwall VW2 entrusted the team at the Monaco Grand Prix in 1956 to the driver Maurice Trintignant to whom the miniatures modeled after the item number S7200 prototypical.