The collections of the trendy large scale can be extended by a highlight on the subject VW / Volkswagen: Extremely many and well executed details 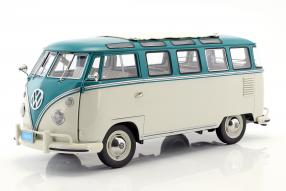 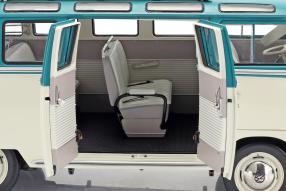 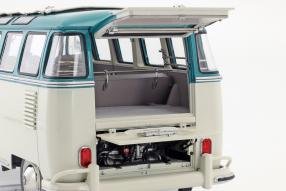 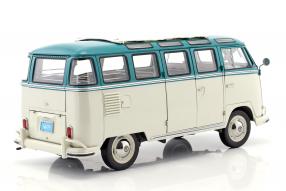 Hard-working readers of our blog know that 1:12 scale modelcars are among the newcomers in the market that are enjoying a growing fanbase. With the Volkswagen T1 Sambabus from Sunstar - self-spelling Sun Star Models - has now released a modelcar that leaves our mouths wide open with amazement, as the overwhelming amount of details and the quality of the design inspires us as rarely a miniature before. It's unbelievable how much effort the manufacturers of the diecast model have given to render each part as true as possible concerning the original. The fact that they decided to build the 1962 appeared bus, with the legendary panorama windows in the roof, does not really surprise us. This minimum requirement is mastered brilliantly!

But first, a brief look back in history: The VW Transporter Type 2 series was released on the market under the name T1 in 1950 and was produced until 1967. Until the start of his successor, about 1.8 million pieces had been produced. Already in the second year, Volkswagen introduced the Sambabus, which was called Microbus Deluxe in English, and came with comparatively luxurious features. Lots of chrome on trim, emblem and hubcaps; a folding sunroof, a two-color paint and especially the roof windows distinguished it from the standard version. With the two rear corner windows and eight windows in the roof, the car from Wolfsburg came on a total of 23 windows; a number that was reduced at the facelift, by the dropping corner windows, in 1963. So the model car of Sunstar is the original version, because it still has this.

The Sambabus, now traded at six-digit amounts, was powered by the four-cylinder boxer engine known from the Beetle: in 1962, it produced 25 kW / 34 hp in the T1, which delivered a modest 82.4 Newton-meter (Nm) of maximum torque to the rear axle via the four-speed gearbox. We had to rub our eyes when we read from the database that Volkswagen set a top speed of 95 kilometers per hours at the T1: As we said, modesty in terms of performance was included at the time of the T1. The bus, transporter and Sambabus made a strong career, but as a travel and Hippiemobil. Our tip: Click on the webshop and read the long list of details of the approximately 36 centimeters long and limited to 888 units: Moving parts into the interior and engine compartment! Legend: More than 600 items!

Here: Click to the Sambabus from Sunstar in 1:12 at our shop