Before the first race weekend of Formula 1 2018 Norev delivers a model car of the Mercedes-AMG GT3 in 1:18, with a successful entry into the IMSA 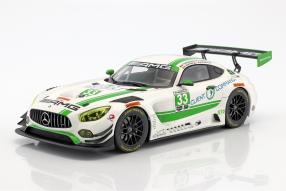 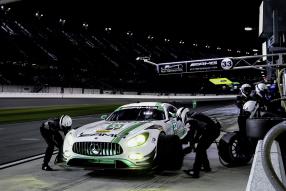 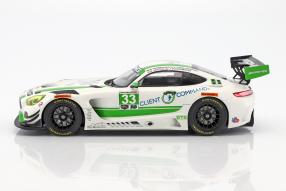 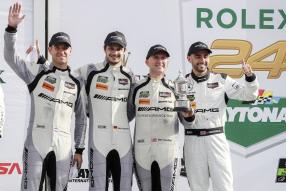 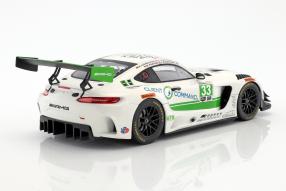 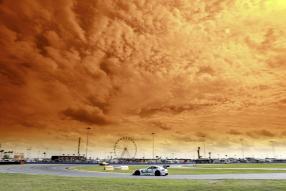 Do you know what we really go for? To be able to tell a lot about model cars that appear as novelties in our shop. Of course this is not always possible, but in motorsport we are well supported by various companies: For example, in the case of the Mercedes-AMG GT3, with the drivers Mario Farnbacher, Adam Christodoulou, Jeroen Bleekemolen and Ben Keating for the team Riley Motorsports who raced in the 24 hours of Daytona 2017. For Mercedes-AMG Motorsport, it was a great start to the IMSA WeatherTech SportsCar Championship: Riley Motorsports Team AMG achieved a third place finish in the traditional Rolex 24-hour race in the most important North American sports car series in the Mercedes-AMG GT3 GTD class. Norev is now bringing out this exact model car.

And this model car is especially important, because ultimately the prototype, with the hard fought fourth place in the US final, the Petit Le Mans race at Road Atlanta in October last year, secured the driver, team and brand title in the Endurance Cup as well as second place in the overall standings of the IMSA WeatherTech SportsCar Championship. Therefore, we want to look at the decoration of model car, corresponding with the Daytona race, exactly. But back to the prototype. It had a lot to work out a year ago. Just two weeks after the 24-hour race in Dubai, the car had to enter the prestigious race in Florida, where Mercedes-AMG Customer Sports ushered in a new era, the entry into the IMSA WeatherTech SportsCar Series.

Three Mercedes-AMG GT3 fought at the 55th edition at the traditional Daytona International Speedway for the possible victory in the GTD class, in which vehicles are eligible to start in accordance with the international GT3 regulations. In extremely difficult, changeable weather conditions, Riley Motorsports Team AMG made a custom entry and finished in third place in the class with 27 starters. In the overall standings of the 55-strong field, the US team finished 20th. The driver quartet started from position 19 in the race. The Mercedes-AMG GT3 with starting number 33 was able to work its way forward continuously and with Jeroen Bleekemolen at the helm, reached the top three for the first time after six hours. Despite the changeable weather conditions, all riders showed consistent and faultless performance.

Thanks to perfectly completed pit stops, the AMG Performance Team was able to establish itself in the lead group in a race marked by leadership changes. After a total of 634 laps, the Mercedes-AMG GT3 number 33 crossed the finish line in third, thus ensuring a successful IMSA debut for Mercedes-AMG Motorsport. The winner was a Porsche 911 991 GT3. But we stick to the car of Riley Motorsports, which you can see in the video above and take home as model by Norev. The look and build quality of Diecast model car are top. The lines of the prototype met Norev just as exactly as the interior of the cockpit and the details of the attachments.

The Mercedes-AMG GT3 is not a first time visitor in the blog: We remember the race car in Haribo look. Norev has won a regular place in our shop as well as in our hearts with the model cars for the Mercedes-AMG GT, both in civilian terms and in the offshoots for racing. With that, let's put the closing words to one of the drivers, Adam Christodoulou: "Being in the pits for the last few laps was terrible, I was so nervous, but we made it, we are on the podium, many thanks to Mercedes-AMG and Riley Motorsports 'Both did a great job and I had sensational teammates, we fought and it was really fun, I'm very proud of ourselves.' And whose victory we look forward to at the season opener in Formula One, we'll know that on Sunday afternoon. Enjoy the race.


Click here: for the Mercedes-AMG GT3 from Riley Motorsports in 1:18

Click here: for all model cars of our shop in the scale 1:18 of the Mercedes-AMG GT3