The victory of Lewis Hamilton last Sunday secured the brand with the star the fourth title. We still have some silver arrows in stock. 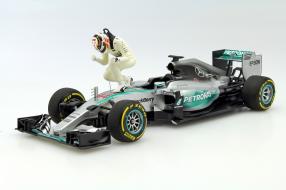 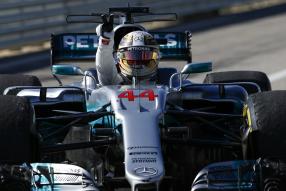 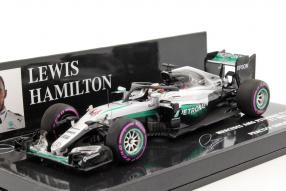 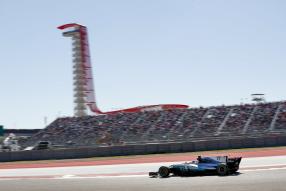 With the 75th Formula One victory, the Mercedes-Benz Silver Arrows won the fourth round of the Constructors' World Championship. The three-time world champion Lewis Hamilton drove the 62nd victory of his Formula One career: his fifth at the Circuit of the Americas and his ninth this season. His team colleague Valtteri Bottags ended the Grand Prix of the USA in fifth place. In the end, the silver had something to celebrate: Mercedes-AMG Petronas Motorsport can look at the points of the constructors on 575 points and leads them with 147 points ahead on Ferrari. The Scuderia Ferrari with Sebastian Vettel and Kimi Räikkönen has, after Austin, 428 points - this advantage is not reachable in the remaining three season races. We sincerely congratulate Mercedes-AMG F1 on this grandiose team performance!

Of course, the winning title draws our attention to the model launches that we have in stock on the subject Lewis Hamilton and Mercedes-AMG F1. To begin with, there are not many more. So if you want to close any gaps, you should quickly follow the link below and look at the overall overview of the available miniatures. Many of the Formula 1 model cars of the manufacturers Spark and Minichamps are limited, such as the test car W07 from 2016, equipped with the Halo head protection and the Minichamps limited to only 500 units. The model is held in 1:43 scale and available under item number 417160444. The model car of the Mercedes-AMG F1 W07 from the Formula 1 2016 in the 1:18 scale from Bburago from its race collection is discounted. Our Tip of the Day!

The model cars of the W06 from 2015 with Lewis Hamilton in front of the cockpit will be very scarce, of which Minichamps has sold only 1,015 copies worldwide in the 1:18 scale under item number 110150544. Lewis leads the driver world championship with 331 points, 66 points ahead of Sebastian Vettel with 265 points - in the remaining season races are still 75 points to be awarded. But if we see how confident and effortless Hamilton has overtaken Vettel in the fifth round of the Austin race, we no longer see many chances for the Heppenheimer to win his first title with Ferrari. Gina has just too little power. Let's hear what Lewis Hamilton has to say after the race.

Lewis Hamilton after the race in Austin

"First of all, I would like to congratulate everyone on the team, whether it's at the plants or on the track, and there has been an incredible boost to this performance this year - we have been pulling together - more than I've seen and seen in the past few years I am very proud of everyone, especially the transition from one generation to the next, which has never been achieved before, which shows the strength of the team and I am proud of it The race was great, so I had probably not had a lot of fun in a race for quite a while - and there were some nice races this year, I did not have a great start, but I stayed relatively quiet as I did from the past knew I can overtake here, "said Hamilton, who wants to win the last races.