23.07.2015Does this BMW have the prettiest liitle head in the model car world

ck-model cars and Minichamps have created a car model, which offers perhaps the most beautiful head of miniature model world. 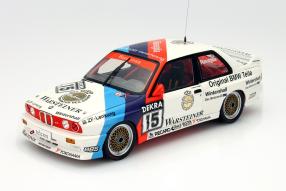 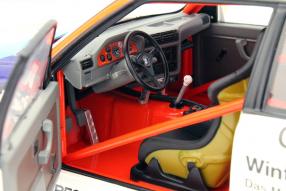 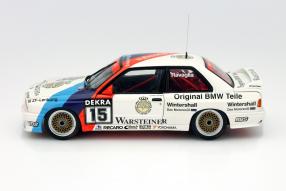 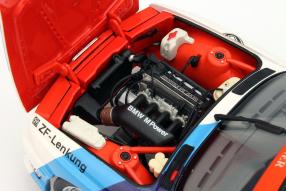 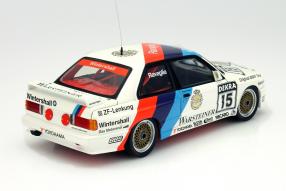 Even imposing figures shrink in scale 1:18 to a format that seems very "cute" even to a usualy very objectiv  author . Just like  the model car BMW M3 of the   E30 series, the DTM winner after the 1989 season, that Team Schnitzer  used  - was at the top of the podium - at  the German Touring Car Championship, and not German Touring Car Masters

Minichamps and ck-model cars created with this M3 a model car whichs overall appearance is rated one of the best  there is in the popular size. The actual highlight of the model  is located under the bonnet in front: The motor is reduced in a way that leaves the viewer breathless . Above all, the replica of the cylinder head and the intake tract is so nice to see that the remaining details of the model seem almost impossible to play a role and the author starts worshiping

Cylinder head gets to the heart


Sure, beauty is generally in the eye of the beholder. Many other contemporaries may also set priorities different from the replica of a racing engine to be viewed as the highlight. But a blog does not necessarily follow journalistic objectivity and can afford to take sides. In the case of the BMW M3 from 1989 now follows a declaration of love: The head - pardon - the cylinder head of up to 276 kW / 375 hp from four-cylinders in the model can be seen without disguises and tells the creation of motor Pope Paul Rosche on a so lovingly detailed and open manner to that a model car has simply everything to their heart. See for yourself - on the screen and in the video - how knowledgeable the two partners have scaled  ignition cables, liquid tank, cylinder head and the cooler : Applause!


The fans can view the same perfect finish, of course, also in all other areas. The body is made of proven zinc diecasting. Both doors  open and reveal a look at a simple yet  functional cockpit . The scaled-down work of Roberto Ravaglia has a pretty to look at  instrument panel in the dashboard of the series, a roll cage, racing bucket seat and prototypically reproduced pedals. A look in the trunk is also possible. The model car, exclusively  produced for ck-model cars in an edition of 1,000 pieceshas steerable front wheels and a correct reproduction of the BBS light-alloy wheels together with their Yokohama tires. It can be ordered under item number 183892095 for 119.95 euros.


The BMW M3 E30 and his descendants gathered more than 1,500 individual wins , 60 national championships in road and hillclimb and in rallying, to 7 hillclimb European Championships, 5 Mitropa Rally Cups and 8 victories in the 24 Hours Nürburgring and in Spa-Francorchamps. Even the Premiere 1987 was  triumphal: Roberto Ravaglia was World Touring Car Champion, Winfried Vogt secured the European Championship and Eric van de Poele was German champion in the M3 of the first generation. In 1989  the victory in the DTM before it was mixed with the new Audi V8 quattro DTM 1990. Against the Audi  the M3 looked like a small car, but all the more handsome is the quality, delivered by ck-model cars and Minichamps. The author of this blog sticks with his comment: There is no more beautiful cylinder head in  a model, right?