On the weekend of July 25th and 26th 58 cars go on the hunt through the night in the Ardennes. We look at what there is to matching models of Audi 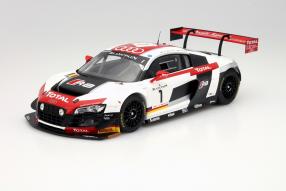 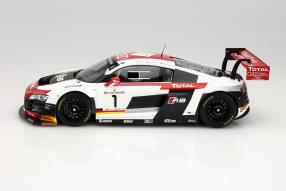 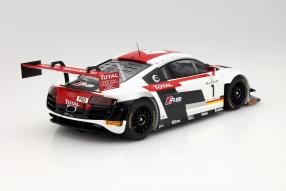 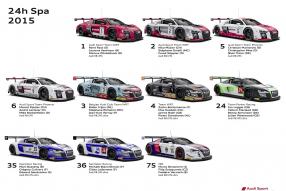 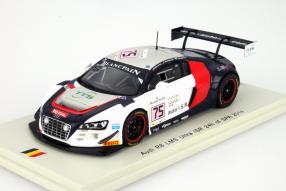 This coming weekend will be the 68th edition of the 24 Hours of Spa. Audi is at the traditional race in the Belgian Ardennes with its new Audi R8 LMS t and looking at the weekend of  July 25th and 26th 2015 as a test: In September Audi starts with the series production of the new Audi R8 LMS for customer sport and sets the final specification of the motor sportster  after the race at Spa-Francorchamps . 58 vehicles will be starting by the regulations of the GT3;  11 labels will bring their cars. In addition to the  cars based on the new, second generation of the R8 6 more GT3 sports cars from Audi will be present. An opportunity also for collectors of motorsport car models, to complete the domestic collection. We have seen what miniatures for role models of the 24 Hours of Spa 2014 are available.

The 24 Hours of Spa in the model: Audi


As friends of model cars know, the label Spark is very fast and provides the favorites of events such as the Spa in a very short time . Surplus on the shelves of retailers shrink  often faster than butter on the hot asphalt of a racetrack. For those who missed to put the winner of the 24 Hours of Spa in 2014 on the shelf,  can fill this gap with the Audi R8 of Team Belgian Audi Club Team WRT in 1:18 scale. The model car is made of resine plastic and forms with the R8 LMS Ultra after the facelift of the last version of the racing R8; brought to the finish line by Rene Rast, Markus Winkelhock and Laurens Vanthoor. The technically very sound and prototypically implemented model car is limited to 300 copies  and available under item no 18SB002 for 154,95 Euro.


We like the model so much  because with this miniature, the filigree gratings are designed pierced in the rear apron - the collector can  see through it and catch a glimpse of the lower part of the drive set. Exhaust system and diffuser are also shown prototypically. Perforated are also the ventilation slots in the disc to the motor  as well as the holder of the rear spoiler to the respective correct positions. The lights at the rear copy the layout of the serial models perfectly. The antenna on the roof and the side blades have been  implemented knowledgeable  into the model. What also  applies to the instruments, the instrument panel and the racing seat. Filigree is also the front with the daytime running light strips, splinters and carefully modeled air intakes.


Rast, Winkelhock and Vanthoor start againh  with the number 1 with  the new Audi R8 LMS in 2015 . The Team Racing Sainteloc made 4th place at last years race  with the drivers Stéphane Ortelli, Edward Sandström and Grégory Guilvert .  Spark presented a limited edition of 500  copies in  1:43 scale of the Audi R8 LMS ultra  which is also still available the detailing bow and stern just as high quality as the model presented here  in 1:18. The smaller version will cost 59.95 euros and can be ordered under article number SB074. The team Saintéloc Racing starts in 2015 with the previous year's edition of the Audi R8 LMS ultra with the following rider line: start number 35 with Marc Basseng, Grégory Guilvert and Edward Sandström and with start number with Michael Blanchemai and Gilles Lallement.


Basseng drove  for the team ISR Racing in 2014, whose 2014er-R8 LMS Ultra Spark also still has a very nice model car on sale: The car with the start number 75 has been reduced in the 1:43 scale and is available  under item no SB103 for 59, 95 Euro. After 4 pre-races (Formula Renault 2.0 NEC, Trofeo Abarth Europe, the Lamborghini Blancpain Super Trofeo, the Porsche Carrera Cup), VIP Laps and a Bentley Parade, the main race of the weekend will start 2015 at 16:30 o' clock. The 24 Hours of Spa is based on an idea by Jules de Their and Henri Langlois Van Ophem. It was the first time in 1924 - only one year after the 24-hour race at Le Mans - organized by the Royal Automobile Club Belgium on public roads between Francorchamps, Malmedy and Stavelot. The track is 6.976 km long today. Our tip: Be sure to go and the drive outside the track when there is no race. It is worth it! 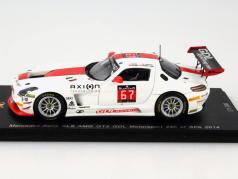 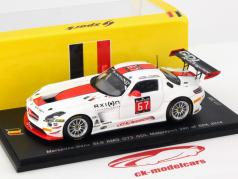