Audi confirmed just a few days ago to become the first German automotive manufacturer to be involved in Formula E. Greenlight brings matching model cars in 1:18 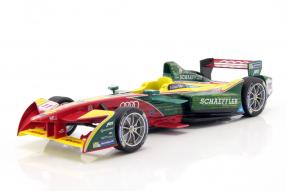 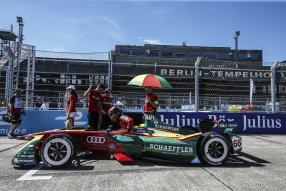 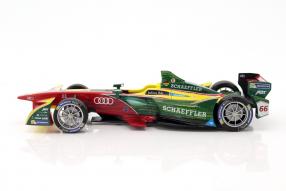 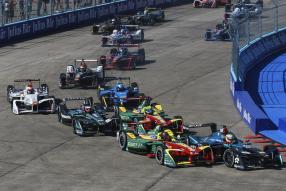 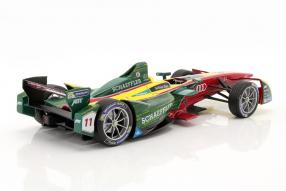 Electrically powered racing cars - it seems as if this is the future of motor sport. Inspired by this expectation, Audi AG decided to be the first German automaker in Formula E to compete with the 2014/2015 debut season. The brand with the four rings takes over the starting point of ABT Sportsline. The team from the Allgäu has been successfully present in the Formula E since the foundation of the electric racing series and will be supporting the Audi racing cars as a team. Audi Sport ABT Schaeffler starts the fourth Formula E season in Hong Kong at the beginning of December. Audi has been the name of the team since the first Formula E season in 2014 and has so far provided one of its factory drivers with the Brazilian Lucas di Grassi. Abt was also able to use the infrastructure of the Competence Center Motorsport in Neuburg.

On 07 July 2017, it was announced that Audi has intensified its partnership with the 2016/2017 season through financial and technical support. Now, taking over the ABT Sportsline take-off position, the final step towards a complete factory deployment will take place under the team name Audi Sport ABT Schaeffler. "Over the last few months, we have been driving the Formula E ever more intensively - on the Renntagen, in the development of the new powertrain and also with numerous actions off the track," says Dr. Peter Mertens, Chief Technical Officer of Audi AG. "The fact that Audi will be the first German manufacturer of automobiles in the racing series from next season is also a clear commitment to our brand for electric mobility, starting on December with the new Audi e-tron on the road."

The course is set

The fourth Formula E season will begin in Hong Kong on 2 December and will then be held in South and North America, Africa and the metropolises of Rome and Paris. "The Formula E offers spectacular motorsport in the middle of fascinating cities and is a great stage for presenting electric motorcycling and motor sport in its most emotional form," says Audi Motorsport coach Dieter Gass. "We are currently experiencing an extremely exciting season with a gripping title fight. I am delighted that the team has now set the course for a successful future. "To date, Team ABT Schaeffler Audi Sport, with their pilots Daniel Abt and Lucas di Grassi, collected 23 podiums in the 29 races so far, including five wins.

The Model cars are from Greenlight

The latest model cars for Formula E are now also available. The American label Greenlight has delivered miniatures made of zinc die-cast to the racing cars, which correspond to the configuration of the current season, therefore appear in optics 2016/2017. Still under the old name ABT Schaeffler Audi Sport, Greenlight delivered the service car of Daniel Abt, the ABT Schaeffler FE02, under the item number 18108; Under 18107 it is the model of Lucas di Grassi. The miniatures are not as sophisticated as a Formula 1 model car from Minichamps or Spark with regard to driver figures, antennas and other details, but they are solid and handcrafted without blemish; Impressions and the appearance match perfectly with the prototypes.

Together with the official technology partner Schaeffler, Audi is currently developing the new powertrain, which will be used next season. The free spaces in Formula E are currently limited to all engine, gearbox, suspension and software components. "The performance in Formula E between manufacturers, teams and drivers is enormous, which makes the details even more crucial in the development process." Of these, we do not see too much, but Greenlight also has Modellautos to Formula E vehicles of the other teams in the program, from which you can convince by a look at the shop via the embedded link below. Next weekend, on July 15 and 16, the Formula E Station will start in New York, during Formula One in the UK and the WEC at the Nürburgring.