With a high-class model car in the 1:18 scale, we are looking forward to the weekend: the joy of the details of the model is great! 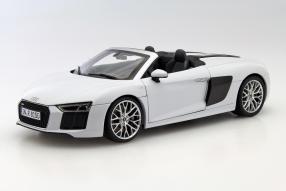 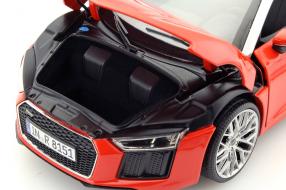 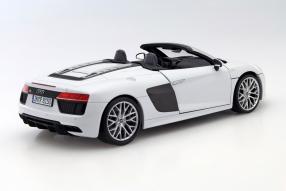 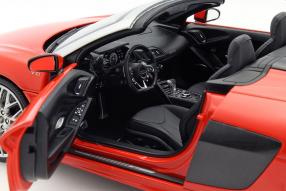 Spring! How nice it has been the past days, the first two-digit temperatures after a severe winter - a really cool thing. Could remain so, but a little is a dream, because it is finally only mid-February, so winter in reinkultur. Dreams can be (n) from an exit in the Audi R8 spyder of the newest, so second generation, the iScale us in a fantastic miniature in the scale 1:18 converts. The label brings the open R8 first in Dynamitrot and Suzukagrau-Metallic. The modellautos are made of zinc die-cast, have small gap dimensions for the doors and hoods to be opened, thus presenting themselves at a high level of craftsmanship. Accordingly, look and look match exactly with the model; The edges and lines are perfectly converted into the so-called Bburago scale.

Look at the basic data of the model

The Audi R8 Spyder starts with 397 kW / 540 hp from 5.2 liters displacement. The V10 suction motor accelerates the car from zero to 100 kilometers per hour in 3.6 seconds using its maximum torque of 540 Newtonmeters (Nm). The top speed is 318 kilometers per hour. The Audi R8 redefines the appearance of the brand from Ingolstadt since its first appearance in 2006. With a loan to the racing car for Le Mans, the R8 carried the successes of Audi on the track at the Sarthe. As with its predecessor, Audi has also designed a roadster for the second generation of the super sports car, which is of course intended to appeal to particularly dedicated drivers.

"The 5.2 FSI naturally aspirated engine in the new Audi R8 Spyder ensures pure emotion with spontaneous throttle response, fast turning-up and inimitable sound," said Dr.-Ing. Stefan Knirsch, Member of the Board for Technical Development: "Compared to the R8 Coupé, the engine sound is now even more intense in the open high-performance sports car." The open two-seater weighs only 1,612 kilograms dry. Its strong backbone is the newly developed Audi Space Frame (ASF) in multi-material construction, which consists of aluminum and carbon. 79.6 percent of these are aluminum parts. The highly rigid body weighs 208 kilograms; The torsional stiffness has increased by more than 50 percent compared to the previous model. Sill plates, front window frames and A-pillars have been specifically reinforced.

The Modellauto shines with perfect finish

All these details were very well recounted by iScale; Zierteile et al. Also in carbon look. The detailing of the fittings and controls tempt you to get in. At least in the head. The R8 Spyder has a lightweight soft top that runs in two fins. An electro-hydraulic drive opens and closes the convertible top in 20 seconds - up to a speed of kilometers per hour. The rear window, embedded in the wall, can be moved in and out. When all the windows have been raised, the driver turns the vehicle over with a small amount of turbulence, according to Audi. But a little wind around the nose will not disturb us if the sun's rays gain in heat permanently and then bring us back the spring: just patience - it does not take much longer.

We wish you a nice weekend!