Above all, the bitter defeat against Max Verstappen in the World Cup showdown in Abu Dhabi is hovering over Lewis Hamilton's 2021 Formula 1 season. Missing out on an eighth title has made it almost forgotten that the Brit had another impressive season. 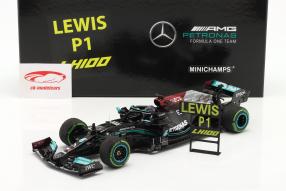 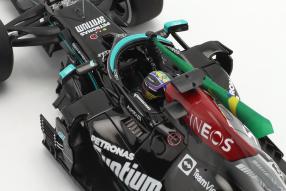 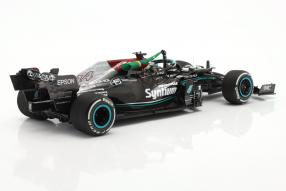 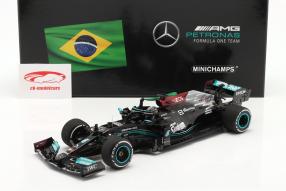 Hamilton excites his fans with the tough fights against Verstappen and with fantastic races. The seven time world champion had won eight out of 22 Grand Prix, some of them extremely impressive. Minichamps released two special winner-Mercedes of Lewis Hamilton from the year 2021 and with limited number.

Hamilton's victory at the Russian Grand Prix in Sochi came kind of surprisingly. In the race, which was hit by rain towards the end, Lando Norris in the McLaren was on the verge of his first premier class triumph. But the young Brit made a mistake on the slippery track on the third to last lap. His compatriot advanced and won. For Hamilton it was the 100th win of his career - a milestone that no other driver has achieved.

The Sotchi-winner vehicle from Minichamps in scale 1:18 is exclusively for ck-modelcars limited to 555 pieces. The cockpit has been replicated true to the original. Also included is the "Lewis P1 LH100" pit panel. The model is delivered in a high-quality collector's folding box.

The second model is reminiscent of the 2021 Brazilian Grand Prix. Hamilton won on the circuit near São Paulo, even though he probably wasn't one of the favorites. Although he set the best time in qualifying, he was disregarded due to a rear wing that did not comply with the rules.

In the sprint race on Saturday, the Briton moved up from last place on the grid to fifth place in the short 24-lap race. A drop of five places due to an engine change ultimately meant starting position ten for the Grand Prix on Sunday. World Championship opponent Max Verstappen started the race from pole position.

It didn't take long for Hamilton to meet the Dutchman. After his spectacular race to catch up and a lap-long battle, he conceded to Verstappen and clinched victory in Brazil. Thanks to the success, the Mercedes driver once again significantly reduced the gap in the fight for the world championship crown.

The winning Mercedes-AMG F1 W12 E Performance from Minichamps also comes in a collector's folding box. Here, the cockpit is faithfully reproduced, too. A special feature is the driver figure of Lewis Hamilton, who is holding the Brazilian flag waving in the wind from the cockpit. These models in scale 1:18 are even limited to 300 pieces.

Who should secure these models ? Definitely the fans of Lewis Hamilton, who want to remember the highlights of the Mercedes driver with a few special memorabilia after the disappointing World Cup final.

[18.10.2022] 1996 as the season that made the Opel Calibra immortal in the DTM/ITC and produced Alexander Wurz as a junior driver 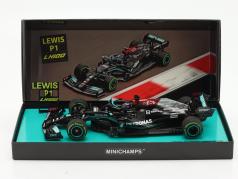 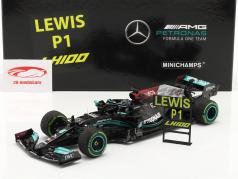 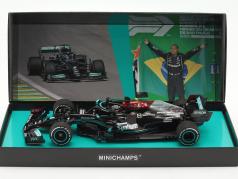 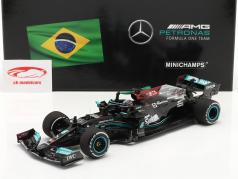