02.08.2022Fans of Valentino Rossi? ck-modelcars has something for you!

Valentino Rossi continues to make a name for himself - even though the nine-time motorcycle world champion ended his two-wheeler career in 2021. ck-modelcars has a large selection of reduced models in the shop and reading material for all fans of the legend. 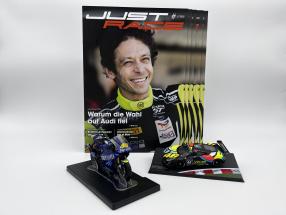 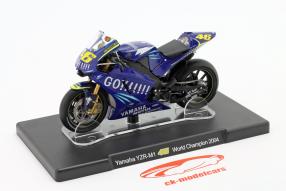 Who thinks of motorcycling racing, inevitably thinks of Valentino Rossi. The Italian marked the scene like no other and is still considered an icon of the sport today. A corresponding number of models are available from the “Doctor” and his motorcycles. From the Yamaha YZR-M1, with which he became world champion in 2009, to the Aprilia RS 125 from the 1995 season. These are just two of many models in scale 1:18 from Altaya.

Motorcycles in miniature format are also available from Minichamps. For example, a 1:4 version of Rossi's world champion motorcycle from season 2004. Fans know the meaning behind this bike: It was the motorcycle with which he first competed for Yamaha in MotoGP and - to the great surprise of the scene - was able to prevail against the competition from Honda & Co. right away.

So if you want to bring a Valentino Rossi collection home, you currently have the best opportunity to do so thanks to ck-modelcars. In addition to the multiple motorcycles, there are also small-scale helmets and a scale 1:43 Ferrari 458 Italia GT3 from the Blancpain Endurance Series.

Heard correctly: Rossi also drives car races! In 2022, he competed a full season in GT-sports for the first time. You can read about why he chose the brand Audi and Team WRT in the new version of just race. ck-modelcars includes the motorsport magazine with its orders free of charge.

Here you come to the Valentino Rossi models.