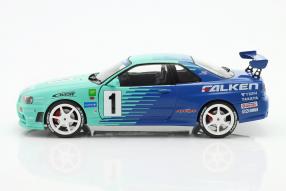 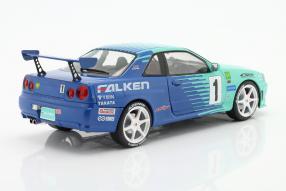 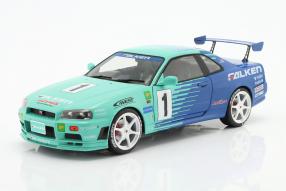 The Nissan Skyline GT-R on the basis of the R34 was used by Falken Motorsports in the VLN and 24-hour races at the Nürburgring in the years 2001-2005. The special thing about it was that in all 5 races on the Nordschleife, always the same four drivers where behind the steering wheel. German Roland Asch, who is considered a specialist on the Nürburgring, Dirk Schoysman, a Nissan test driver who also has a wealth of experience on the Nordschleife. The other two drivers were Tetsuya Tanaka, who had previously driven the GT-R in the Japanese Touring Car Championship, and Takayuki Kinoshita, who had made a name for himself both as a racing driver and as a motorsports journalist. Solido revives this motorsport icon in scale 1:18. The model has steerable front wheels and opening doors. Both the paintwork in the "Falcon design" and the interior were recreated in detail by Solido. The model in scale 1:18 is right-hand drive. All in all, a piece of Japanese Nordschleife history from the early 2000s that will find a place in every racing collection.

Falken Motorsports has been an integral part of the 24-hour race since 2000. At that time there was a Toyota Supra GT, which started as an outsider, thrilled the fans with its exhaust sound and the fact that it could spit out the odd flame due to misfiring. This spectacle proved to be more than worth seeing, especially at night. The Skyline GT-R served Falken Motorsports as the successor to the Toyota Supra GT used up to that point. To this day it is the Japanese car with the best finish in a 24h-race at the Nordschleife in the years 2002 and 2004, finishing 5th. The modifications compared to the original vehicle were anything but subtle. The tires have been widened in order to be able to master the many fast passages of the ring better. The fenders have also been widened to make room for the new tires. The bonnet, side doors and trunk lid were made of carbon fiber to reduce the weight of the racing car as much as possible. What benefited the Skyline in the very changing weather conditions in the Eifel was its all-wheel drive.

As for the engine, Nismo (Nissan Motorsports International) also had a hand in the case of the Falken Skyline GT-R. In addition to road vehicles with a racing character, Nismo is always used when it comes to motorsport. In the Japanese GT championship, it is the Nismo company that turns Nissan's production vehicles into real GT sports cars. The RB26 engine of the Skyline GT-R from Falken Motorsports weighs only 1390kg and has 500hp at 550Nm of torque. 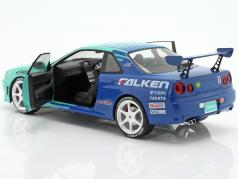 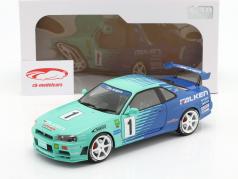