The legacy to the Opel Manta, or as the Autobild titled "an Opel for the left lane" 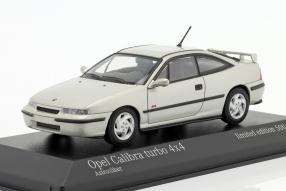 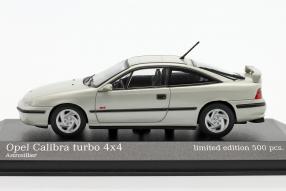 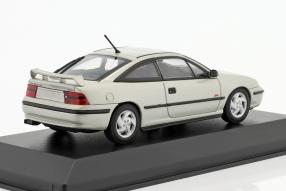 Without any doubt, the Opel Calibra is one of the Opel models that can be called a cult. When the Calibra came onto the market in autumn 1989, many saw it as the long-awaited successor to the legendary Opel Manta. Insiders even affectionately call the Calibra “Manta C”. Today we present the all-wheel drive version of the Calibra from 1992 in the color astro silver from Minichamps. In this case, the Calibra also has the model suffix "Turbo", which stands for the most powerful engine with 204 hp. The Minichamps Calibra is in scale 1:43. The model, produced exclusively for ck-modelcars and modelissimo, is limited to 500 pieces. At the end of production, the role model in scale 1:1 had around 240,000 vehicles, of which 5,150 were still registered at the beginning of 2021. Whether it's on a scale of 1:1 or 1:43 - if you want a Calibra, you should grab it before there aren't any left.

The Calibra was equipped by Opel with transversely mounted four-cylinder engine and front wheel drive. The weakest engine came from the sister model Vectra and developed 115hp from 2.0 liter displacement. The 2.0 liter 16V brought it to 150hp. In the turbo variant, the engine even delivered 204 hp. In addition to the four-cylinder engines, a 2.5 liter six-cylinder engine was also available as an option, which brought it to 170 hp. Well-running Calibras are said to reach a top speed of 250 kph. In the fall of 1990, the optional all-wheel drive moved into the Calibra. In 1994, 1995 and 1996, Opel also celebrated successes in motorsport with the Calibra. The 470 hp Calibra with the paintwork of the shower gel manufacturer Cliff was successful in both the German Touring Car Championship and the ITC (International Touring Car Championship). 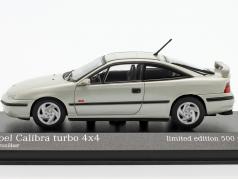 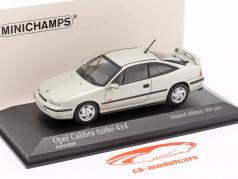