02.06.2022With support by ck-modelcars: White Angel for Fly&Help collects donations for schools in Togo

The noticeable White Angel Viper did not make it to the finish line at the 24 hour race of the Nürburgring 2022. Her failure was a pity on the one hand, but easily bearable on the other. 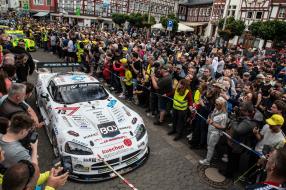 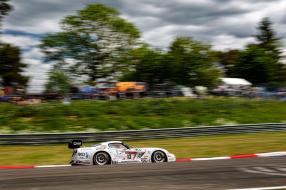 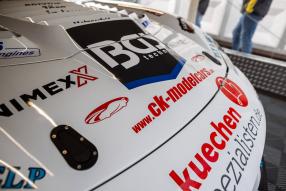 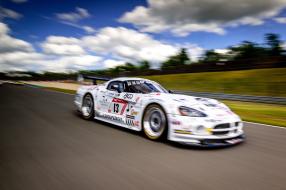 Because the start at the endurance classic event had a far greater goal than lap times and trophies - the good cause. And this with success. The White Angel Viper team could collect a lot of donations for the foundation Fly&Help for the construction of almost three schools in Togo. ck-modelcars had supported this project and visited initiator Bernd Albrech in the paddock.

After a chat and a few photos together by the project initiator, team boss and driver Bernd Albrecht and ck-modelcars managing director Christoph Krombach, things went on, because there was a lot on the program.

The White Angel Viper Team came to the Adenauer Racing Day on Wednesday. After a two-year Corona break, the popular event kick-off in the otherwise tranquil Eifel town returned with drums and trumpets. Hundreds of racing fans saw the white Viper roll in front of the show stage and here at the latest they became aware of the donation project for the Fly&Help Foundation. "As usual, we were the first team to be entered and also led the lineup of racing cars in Adenau," says team manager Bernd Albrecht. "Everyone got goosebumps thanks to the many fans around the stage and in the car."

Also on the track, the Viper knew how to convince in her farewell performance. The strong practice times culminated in the in-class pole position in the AT category for alternative fuels. The V10 racer drove again with E20 fuel. After a problem-free first third of the race, the Viper had to stop for repairs around midnight with a broken front splitter. The unfathomable diving of the front end when braking also damaged the second front splitter until the early hours of the morning. The lack of grip also pushed the tires to their limits. With a heavy heart, Bernd Albrecht withdrew the Viper at around 6:00 am for safety reasons.

But pride in the donations that had been collected soon outweighed them. Money for two schools in Togo was already collected in the run-up to the event. Thanks to the raffle and donations in the team tent, the collection box on the ferris wheel in the paddock and the helicopter flights offered, almost all of the money for a third school came on top of that.

"My heartfelt thanks go to the whole team, who worked with so much joy and passion that we were even able to top our goal of two schools. A great performance that we never expected,” said Bernd Albrecht. “Thank you to all supporters, sponsors and the fans who donated. You're great. We'll be back next year with a car that's also exotic and fast. Let yourself be surprised."