18.05.2022A piece of attitude towards life of a whole generation presented by the label Schuco 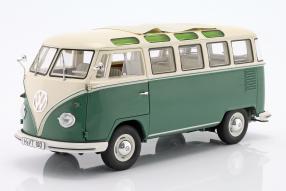 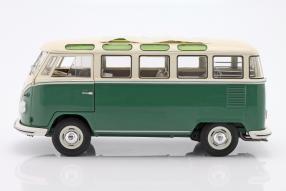 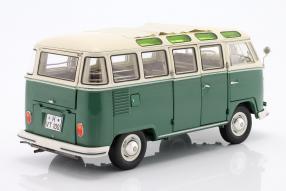 From the label Schuco comes a model, which has marked the automobile history, in Germany as well as in other countries, sustainable to this day. The models produced from diecast are based on a classic with cult status from the house of VW. Because VW is no longer known for any car, besides the beetle, in the world than for the T1 bus, which is also lovely called "Bulli". The model in scale 1:18 from Schuco is painted in two colors, as is usual for the T1 in most cases. In this case in the colors white and green. The engine compartment of the rear engine was faithfully reproduced by Schuco from the original. The model has some "openings". This means that the tailgate and bonnet, as well as the side doors and the driver's cabin doors can be opened. The sliding roof of the T1 can also be slid open on the model. The eye then falls on the detailed interior fittings, which Schuco has based on the original model as best as possible for fans of the T1. The front wheels of the Schuco T1 are steerable. If you want to bring a piece of history into your home showcase, you will definitely get your money's worth with the T1 from Schuco.

The VW T1, which is also affectionately known as the Bulli, was the first model in the VW bus series that is still being produced today and continued in November 2021 with the seventh model in the series. To this day it is unclear whether the "Bulli" got its nickname from the adjective "bullig" (German word for brawny) or whether the naming is a combination of the words "bus" and "delivery van". The T1 was produced by VW between 1950 and 1967 1.8 million times in a wide variety of versions and is considered a symbol of the German economic miracle. After all, the T1 came onto the market at a time when many transport routes were still in ruins due to the Second World War. In the version as a faithful "cargo donkey", the T1 was able to contribute to the reconstruction. At that time, the price of a T1 was around DM 5850 (DM = old German currency), around DM 150 more than the price of a fully equipped Beetle. Today, a T1 in good condition can quickly cost 15 times the original price.

The engine of the T1 in 1950 had 1100 ccm³ and developed 25hp. Over the years, the power increased, so that the last T1 in 1967 was equipped with a 1493 ccm³ engine that had 44hp and a top speed of 110 kph. The VW T1 shaped entire generations. It was one of the first vehicles suitable for traveling and sleeping in the car at the beginning of the 1950s, a decade in which mass tourism was beginning to take off. In the decades that followed, the T1 was an integral part of the hippie movement. In the 1960s and 1970s, when some hippie trails traveled east and south from Europe, brightly painted T1 and T2 buses were widely used as touring vehicles. Even if VW suspected a loss of image for the brand at the beginning of the movement, this never happened. From today's perspective, one can say that the hippie movement of the time made the T1 even better known. The VW T1 thus combines economic success with openness and diversity. 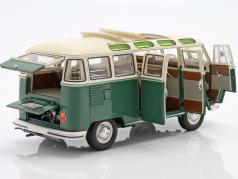 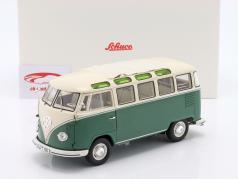