10.05.2022Minichamps and a fast family estate car with racing genes 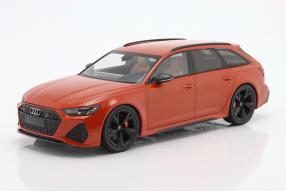 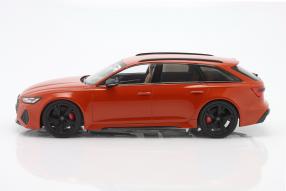 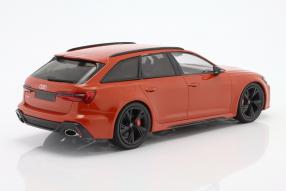 In terms of estate cars, the Audi RS6 is the most powerful, which one could buy in the model range from Audi. In the version C8, the Audi RS6 has been the fourth edition of the family station wagon with racing genes since 2019, in the 20 year model history. In 2002, the Audi with the model designation RS6 was included in the program in Ingolstadt for the first time. Our blog today is about the orange Audi RS6 with black rims from the label Minichamps. The model in scale 1:18 has steerable front wheels and is limited to an exclusive number of only 336 pieces. All details, such as the red brake calipers and the exclusive leather interior, were modeled on the original by Minichamps.

The first Audi RS6 was presented at the Geneva Motorshow in 2002 on the basis of the A6 C5. The turbo charged V8 engine, which was placed into an Audi for the first time, developed 450 hp. The RS6 differs from the series A6 through wider fenders, wider side skirts, changed front and rear bumpers and its oval dual exhaust system at that time like today. In 2008, the C6 followed the C5. The C6 received a V10 engine with 5 liter displacement and a power of 580 hp. In December 2012, the third version of the RS6 followed with the RS6 C7. In the C7, the bi-turbocharged V8 engine found its place in the front again. The consumption of the all-wheel drive RS6 could be reduced to just 9.8 liters/100 km through various measures, such as cylinder deactivation. The C7, which is locked at 250 kph, accelerates from 0-100 in 3.9 seconds.

The fourth generation of the RS6 has been available since 2019 in the form of the C8 model. As with the C7, the C8 is only offered as an Avant. The RS6 version of the C8 differs greatly from the normal version of the A6. Only the roof, the tailgate and the front doors were taken over from the standard A6. Otherwise, Audi has reached deep into the bag of tricks of its own model range. The headlights come from the A7, the frameless radiator grille is based on the R8. The air inlets on the bonnet and the four centimeter widened bodywork clearly distinguish the RS6 from the A6 or the S6. It also has its own rear diffuser and 21-inch wheels as standard. 22 inches are also possible for an additional charge. The engine has remained the V8 of the previous model. However, this was supplemented by a mild hybrid drive. The performance increased again, so that the C8 now delivers around 600 hp and accelerates from 0 to 100 in 3.6 seconds. In the basic version, however, the PS monster is locked at 250 kph. If that is too slow for you, you can use the dynamic package. There the Ingolstadt family station wagon then manages 280 kph before the lockdown takes effect. With the dynamic package plus you can reach an impressive top speed of 305 kph.

[06.05.2022] Chevrolet is breaking new ground and is using a mid-engine concept for the Corvette C8.R 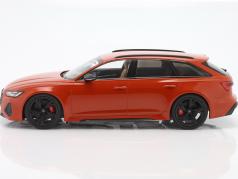 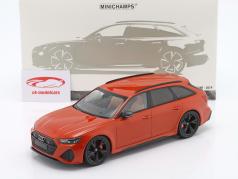