06.05.2022Chevrolet is breaking new ground and is using a mid-engine concept for the Corvette C8.R 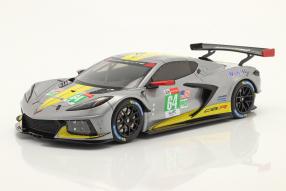 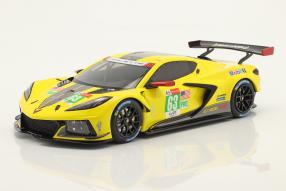 With the C8.R, Chevrolet sends a new race car to the competitions with great potential. As already with the C6.R and C7.R, the development of the street version and race car ran parallel to each other. The department responsible for the street version of the C8.R at Chevrolet should also learn from this cooperation and gain experience. But this time Chevrolet made a drastic change. The Americans changed the engine concept from front to mid-engine. In racing, the manufacturer promises more performance. We are presenting two vehicles from the label GT-Spirit in our blog today that competed in the 2021 24 Hour race in Le Mans. The models of the C8.R in the main colors yellow and grey are based on the originals in every detail. GT-Spirit has shown both the design lines and the details in the wrap of the race cars here as usual. The models in scale 1:18 are made of high-quality resin and are limited to just 999 pieces per color. So if you want to call the race car with the muscle car genes your own, you should be quick.

In 2016, the regulations of the GTE have been changed so that the teams were able to work with bigger front and rear diffusers. Chevrolet could then use these chances, which were allowed by their changed engine-concept. The underbody was designed in such a way that the front and rear diffusers could work together optimally. The change to a mid-engine provided the necessary space here. Of course, the C8.R also differs technically from the road version. For example, while the road version gets the intake air from two large intake ducts on the flanks, the C8.R draws in its air through a generous air intake on the rear window. This is more efficient, but for the road version would have meant that the driver's rear view would have been completely obliterated. In general, the topic of "cooling" is a big topic with the C8.R. In the previous models, where the engine was in the front and the gearbox in the back, this was relatively easy to manage. Since both components are now more in the middle of the vehicle, thermal management is a real challenge.

Corvette Racing already has planned the future in terms of race use with the C8.R in the different racing series. The vehicle will be used in the long-distance world championship, as well as in the IMSA-series in the USA. For the GTD-Pro series, the car will be adapted to the GT3 specifications. This also explicitly means a throttling of the engine output. From the 2024 season there will also be a program with customer vehicles in the GT3 series. As before, the Corvette is powered by a 5.5-liter V8 naturally aspirated engine. So the deep rumble of the Corvette, loved by the fans, remains. For the IMSA championship, the engine delivers 500 hp and 650 Nm. For the first time in the history of the Corvette, the two factory cars will start in different designs. GT-Spirit has also included both designs in its portfolio. The starting number 3 is in classic Corvette Racing Yellow. The sister vehicle starts in the silver presentation design. Both designs are reminiscent of days gone by and iconic concepts such as the 1973 Aerovette and 1959 Stingray. 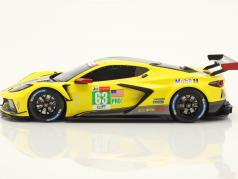 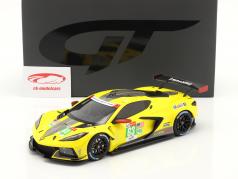 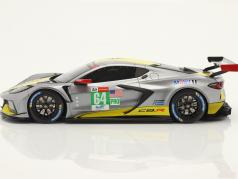 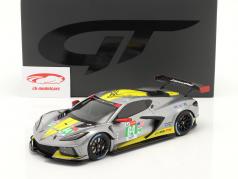