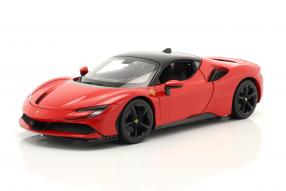 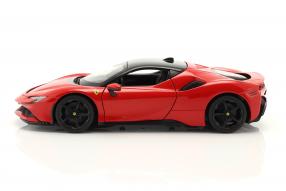 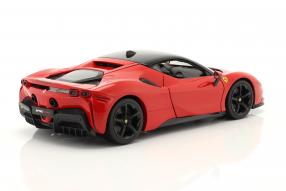 With the SF90 Stradale, Ferrari brings the first vehicle that runs standard with modular plug-in hybrid technology. The name of the 2019 published Ferrari is based on the Formula 1-race car, with which Ferrari had started the season 2019. The SF90 stands for Scuderia Ferrari 90 and should remember the 90th anniversary of the racing team from Maranello. The manufacturer Bburago took this super sports car as a role model for their model in scale 1:18 that we want to present in today's blog article. The SF90 Stradale by Bburago in classic Ferrari-red has steerable front wheels and a true to detail replication of the interior. In addition to the trunk, the engine hood of the Italian can also be opened, which allows a view into the also true to detail engine compartment. The model of the super sports car by Bburago replicates a top price performance ratio and is a proper expansion for the collectors of sports cars or also fans of the brand Ferrari.

Extreme on all levels - that's what you could call the SF90 Stradale. One reason for this statement is the engine concept. The SF90 Stardale's turbocharged V8 produces 780 hp, making it the most powerful V8 in Ferrari's history. The three electric motors that are also installed add another 220 hp, bringing the entire engine concept to 1000 hp. Two of the three electric motors are independent of each other and are located on the front axle. The third engine is located at the rear of the vehicle between the combustion engine and the transmission. Four drive modes are available to the driver to choose from. The super sports car needs just 2.5 seconds to accelerate from zero to one hundred. Ferrari specifies the top speed as 340 kph. Compared to the otherwise familiar interiors, Ferrari is taking new and rather unusual paths with the SF90 Stradale. The approach to designing the interior was to make it as futuristic as possible. After the "Stradale" variant was released on May 29th, 2019, Ferrari expanded the product range on November 12th, 2020 with the "Spider" which has a hardtop.

For the customers who are sporty even more ambitious, Ferrari offers racing-DNA on the highest level. Assetto Fiorano is the name of the special setup that Ferrari has ready at this point. The setup is available on request and is intended to emphasize the racing character of the car even more. All in all, the customer receives Multimatic shock absorbers with optimized adaptation for the racetracks of this world. 21 kg of vehicle weight are saved by making even more parts of the SF 90 Stradale from carbon fiber or titanium. When choosing the Assetto Fiorano setup, the rear spoiler is made of these carbon fibers. In this case, road-approved Michelin Pilot Sport Cup 2 tires provide the power on the asphalt. From the outside, the choice of setup can be recognized by the two-tone paint finish of the vehicle. Even if the Ferrari SF90 Stradale is not really a bargain with a purchase price of over 400,000 euros, seven vehicles were registered in Germany in the first year of sales, 2020. In 2021 there were already 195 copies in one year. 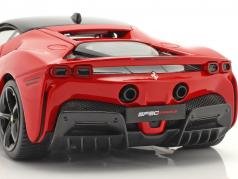 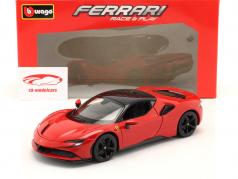